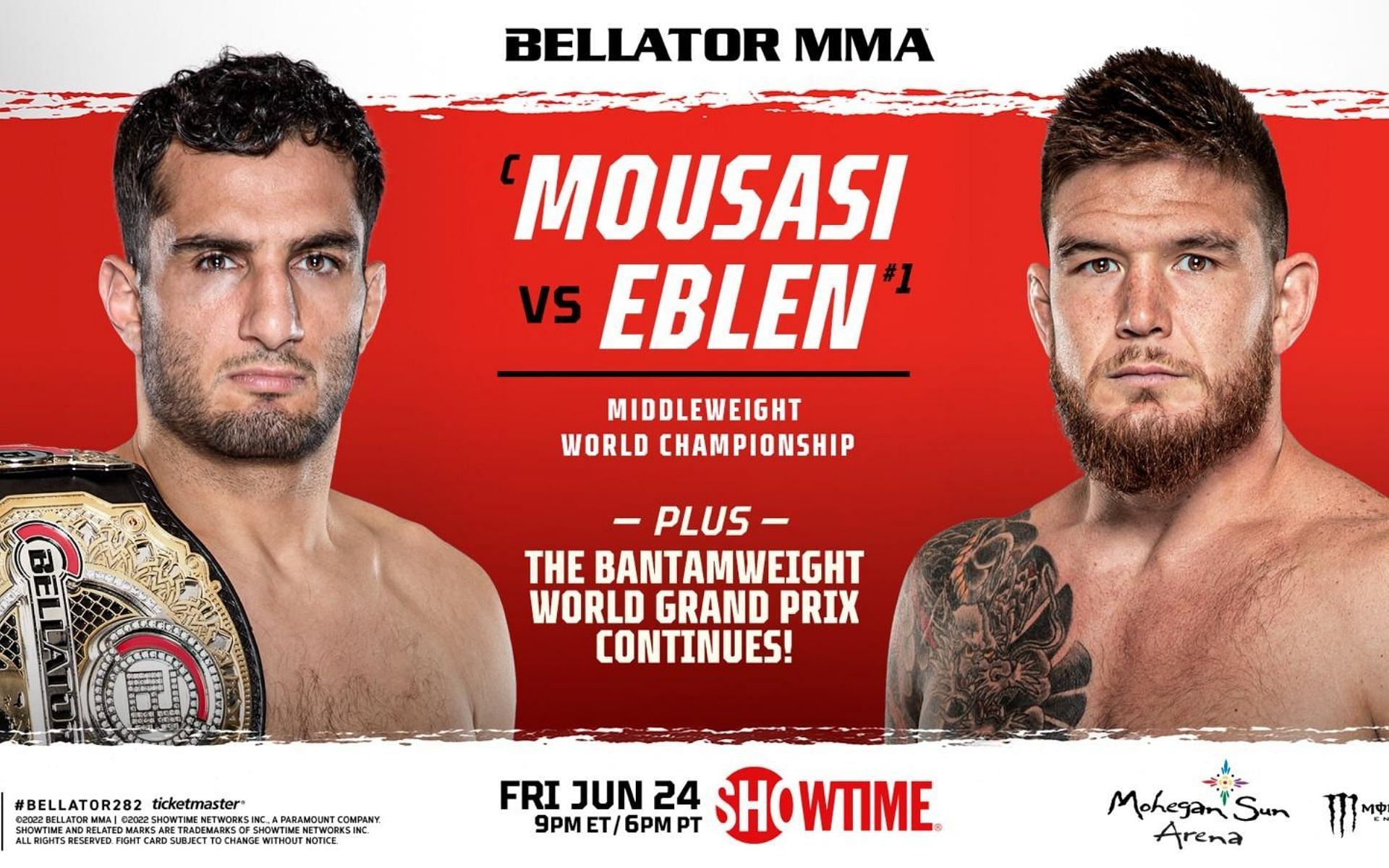 After back-to-back events overseas, Bellator returns to the United States for an event at Mohegan Sun Arena in Uncasville, Connecticut. The arena has become a familiar place for the promotion as they have held events there frequently since 2020.

This will be their first event in over a month, which is surprising considering how much momentum they could have gained.

The event will be headlined by a title fight as middleweight champion Gegard Mousasi defends against Johnny Eblen. The division is loaded with many up-and-coming fighters, including Eblen, who will look to capitalize on the opportunity.

The ongoing Bantamweight Grand Prix will also be featured at the event. After earning their place in the tournament, Danny Sabatello and Enrique Barzola will face the toughest test of their respective careers.

Sabatello will face Leandro Higo, while Barzola will face Magomed Magomedov. This list will look at five bold predictions for Bellator 282.

: @BellatorMMA is delighted to announce that Russian superstar and middleweight BELLATOR #6 Anatoly Tokov has stepped down for a new long-term contract.

🇷🇺: @BellatorMMA is delighted to announce that Russian superstar and middleweight BELLATOR #6 Anatoly Tokov has stepped down for a new long-term contract. https://t.co/x4uXivtojc

Bellator No. 5 middleweight Anatoly Tokov is one of the best middleweights in the promotion. After a two-year layoff, Tokov returned last October and picked up where he left off. He picked up a split decision victory over Sharaf Davlatmurodov in front of his home crowd.

Since joining the promotion in 2017, he has yet to taste defeat inside the cage. Middleweight FedorTeam is currently riding a 6-fight winning streak which includes a victory over former middleweight champion Alexander Shlemenko.

He is looking to pick up 7 straight wins when he fights Muhammad Abdullah in the preliminary part of the event.

Abdullah has a 10-5 record in MMA and is coming off a win over Erick Lozano, whose record was 12-19. Based on the difference in quality of opponents and Abdullah being 36, Tokov should be the betting favourite.

Tokov has a big opportunity as a decisive win could possibly earn him a title shot. With Mousasi defending his title against Eblen in the main event, Tokov could challenge for the winner.

Bellator matchmakers will likely be watching the prelims closely when Cat Zingano takes on Pam Sorenson. Since joining the promotion, Zingano has been the one many believe could be a tough challenger for Cris Cyborg. The fight has yet to materialize, but now could be the perfect time.

After the promotion missed out on signing Kayla Harrison, Cyborg vs. Zingano seemed like the best option available. “Alpha” has won back-to-back fights since joining the promotion and a third straight win could earn her a shot at the women’s featherweight title.

It’s also understandable that Zingano would want one more fight before accepting a bout with the champion. She hasn’t fought since last April, when she submitted Olivia Parker. So this upcoming fight with Sorenson could be a tough challenge and a tune-up fight at the same time.

Alexander Shabliy will take a big step up in the competition when he takes on former Bellator lightweight champion Brent Primus. He’s 2-0 since joining the promotion last year and is undefeated in his last six fights dating back to 2017.

Shabliy has been one to finish fights and could do the same against the No. 2 ranked lightweight. Of his 21 wins, 10 have come by KO/TKO and 7 by submission. Despite his strengths in stand-up, he has proven that he can also find success with his grappling.

“Peresvet” showed how complete he was in his last victory against Bobby King. He took down King several times throughout the fight to earn a unanimous decision victory. With a win, Shabliy could be setting up for a title eliminator or a title shot against winner Freire against Outlaw.

The event could see a star performance from Sabatello, who has become increasingly popular since his last fight. His post-fight personality and interviews became a hit on the promotion’s social media, which could benefit him in the future.

“The Italian Gangster” has excellent wrestling training, which could be Higo’s answer to jiu-jitsu.

Magomedov, meanwhile, will face a tough challenge against Barzola. He has elite-level grappling that could match the former TUF Latin America 2 winner. “Tiger” just lost to Stots, so it will be interesting to see if he can bounce back against a former UFC player.

Bellator middleweight champion Gegard Mousasi is undoubtedly one of the best 185-pounders in the world. He’s a legend in the sport who has fought in multiple weight classes and, at 36, has shown no signs of slowing down.

‘The Dreamcatcher’ defends his title against Johnny Eblen in the main event. Although ‘Diamond Hands’ has an undefeated record of 11-0 in MMA, he will always be considered an underdog. The champion has been much more aggressive in his recent fights as he has picked up back-to-back TKO wins.

Mousasi’s last TKO win was against Eblen’s teammate Austin Vanderford, which saw him inflict his first loss on ‘The Gentleman’. He’ll be looking to do the same against “Diamond Hands” and aim for more lucrative fights in the promotion.

A victory over Eblen will make it three successful title defenses and extend ‘The Dreamcatcher’ winning streak to five.

“Does your wife have an Android?” – When Joe Rogan harassed Dustin Poirier about his unpopular choice