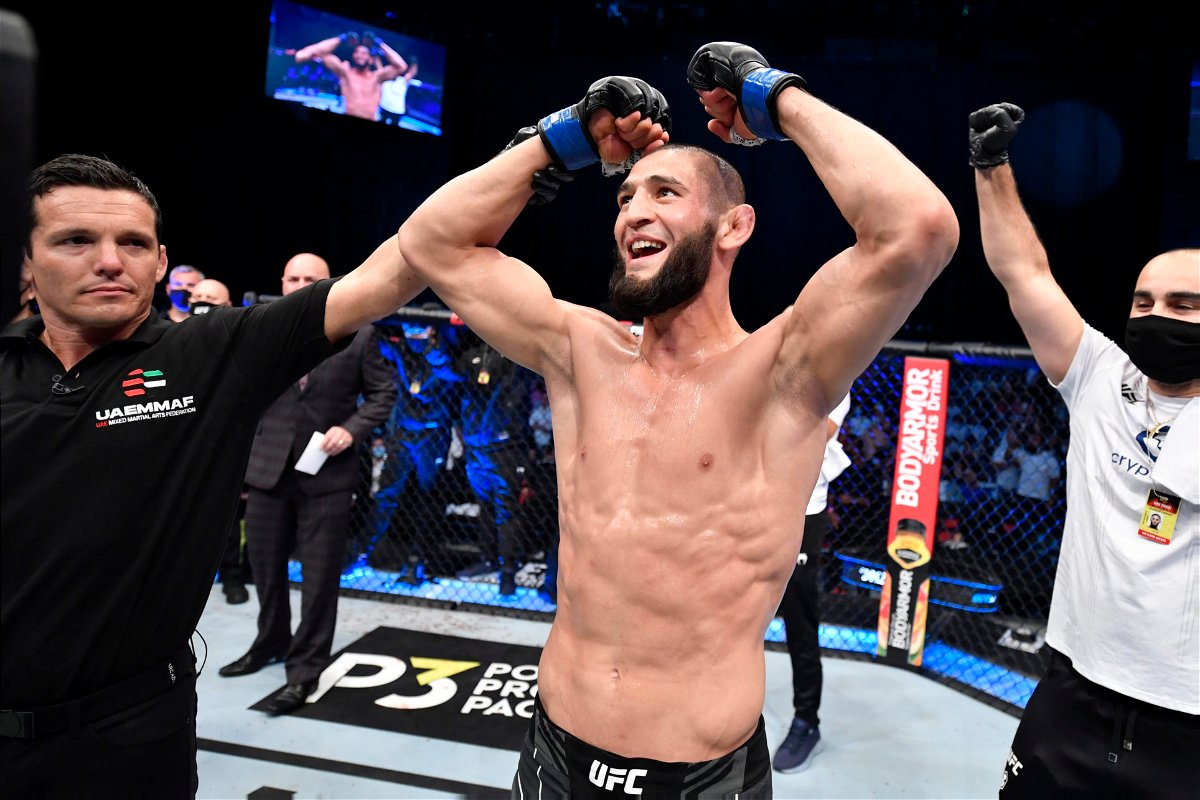 Highly touted UFC prospect Khamzat Chimaev has garnered a lot of attention from around the world. “Borz” found rapid success in the UFC; With only 4 UFC fights under his belt, he has gathered a huge fan base around him. He currently has more Instagram followers than most UFC champions. Even one of the best football players in the world, Cristiano Ronaldo, wished to see the “Borz” play inside the octagon.

Chimaev, on his YouTube channel, has shared details about his interaction with five-time Ballon d’Or winner Cristiano Ronaldo and why he couldn’t come to his fight.

Chimaev said, “He has a game, that’s why he said he couldn’t come. But he will watch my fight.

One of his friends asked him, how did he invite Cristiano Ronaldo to his fights?

“When he started following me, I wrote him ‘he’s the champ’. Then he wrote, ‘smesh everyone’… 100% brother. Then I invited him to my fight, Ronaldo. – ‘Borz’ replied.

“But I’m not a big football fan, but this guy is big. One of the best guys in the world to play games, football. He’s a nice guy. – Chimaev concluded.

When a friend of his pointed out that Ronaldo has the most Instagram followers in the world (over 400 million), he said: “I don’t need this brother. I need money, brother. No need for subscribers. Followers when they get famous bro, it got hard to go somewhere bro.

Ronaldo is an ardent MMA fan. He mainly shared the stage with Khabib Nurmagomedov. The two shared a close bond with each other and promoted each other whenever they had the chance. Thus, it would not be surprising to see the best footballer in the world attend a live event to see the “Borz”.

Gilbert Burns could be next for Khamzat Chimaev

In 2020, when Chimaev made his UFC debut, he fought twice in two weeks in two different weight classes. ‘Borz’ expressed his desire to compete inside the octagon as often as possible. However, after suffering from some health issues, he was ruled out for a year. Later, he returned with an outstanding performance against Li Jingliang in October 2021.

After defeating Li, he is rumored to fight top welterweight contender Gilbert Burns. Although nothing has been official, both fighters have expressed interest in this fight.

The fight itself is very interesting, as there are a lot of unknown elements that ‘Borz’ brings to the table. With ‘Durihno’ already establishing himself as one of the top welterweights, this would be the biggest test of Chimaev’s career. With a spectacular victory, he could find himself facing welterweight champion Kamaru Usman.

Can Khamzat Chimaev get the better of Gilbert Burns? How many more fights would he need to qualify for the welterweight championship? Would you like to see Cristiano Ronaldo attend a “Borz” fight? Let us know in the comments section below.

John Wayne Parr will face Eduard Folayang at ONE X