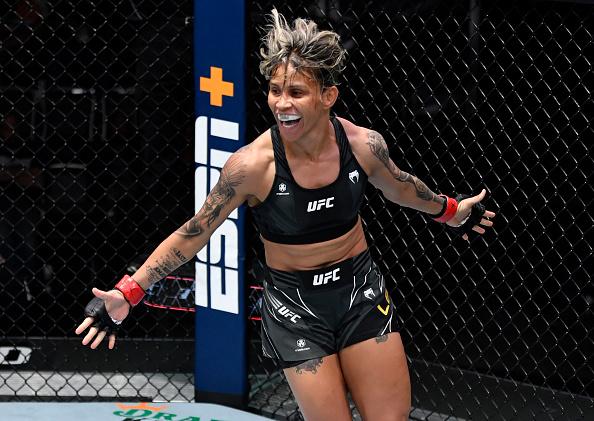 An exciting women’s strawweight matchup between top contenders Amanda Lemos and Marina Rodriguez has been added to the UFC 280 stacked card.

Combat was the first to report the matchup between Lemos and Rodriguez for UFC 280, which is set to take place on October 22 at the Etihad Arena in Abu Dhabi, United Arab Emirates. Combat is the latest addition to a stacked card that features dual title combat. Title fights already announced for the card include Charles Oliveira vs. Islam Makhachev for the vacant lightweight belt and UFC bantamweight champion Aljamain Sterling vs. TJ Dillashaw. Additionally, Petr Yan takes on Sean O’Malley, Mateusz Gamrot takes on Beneil Dariush, and Sean Brady takes on Belal Muhammad.

The Lemos vs. Rodriguez fight pits the division’s No. 8 contender in Lemos against the No. 3 contender in Rodriguez. This should be a great fight between two of the best women’s strawweight fighters, and it’s conceivable that the winner of this fight will be in contention for a UFC women’s strawweight title. The champion is Carla Esparza, and she is expected to face Weili Zhang next. The winner of this Lemos vs. Rodriguez match makes a lot of sense to be the next title challenger after Zhang.

Lemos (12-2-1) is coming off a submission win over Michelle Waterson-Gomez in her last outing. Overall, Lemos is 6-2 in the UFC with notable wins over Angela Hill and Miranda Granger, among others.

Rodriguez (16-1-2) is currently riding a four-fight winning streak and she was hoping for the next title before Zhang gets it after her big win over Joanna Jedrzejczyk. Rodriguez is 6-1-2 in the UFC and she holds notable wins over Yan Xiaonan, Mackenzie Dern and the aforementioned Waterson-Gomez.

Who do you think wins this women’s strawweight fight at UFC 280 between Amanda Lemos and Marina Rodriguez?

MMA reporter, podcast host and handicapper for MyMMANews.com, MMAoddsbreaker.com and Bookies.com. Host of the daily MMAOB podcast. Join me LIVE at 5 p.m. EST Monday and Tuesday for my free live podcast. Over 10 years of MMA writing experience. I love this sport.