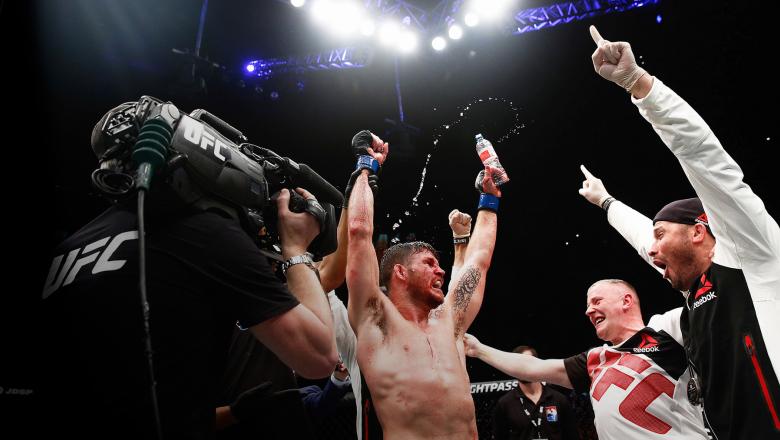 On his way to the UFC middleweight championship, Michael Bisping would face former champion Anderson Silva in his home country of England.

Silva, with his signature hands-down approach, was met and tested early by Bisping’s main jab and combinations. The former champion slipped and rolled with the combinations, but with the greater activity in between, Bisping would have more success in earlier rounds. Bisping would even drop Silva briefly in the second round.

The damage from Silva’s punches became more visible on the British striker’s face towards the later rounds. In the final moments of the fourth round, Bisping would lose his mouthpiece in a striking exchange with Silva. Bisping would attempt to communicate with referee Herb Dean about the mouth guard, leaving himself unattended and unprotected. Silva then landed a flying knee to Bisping’s chin.

The round end horn would sound as Bisping fell to his knees. Silva walked away thinking he had won the fight and would even party atop the cage. As Silva’s team informed the former champion that the fight would be heading to the fifth, Bisping sat on the stool in his corner, doing his best to shake off the cobwebs.

A confused Silva came down from the cage as the fifth round was about to begin. Clearly dazed and still affected by the flying knee, a bloodied Bisping would continue to land combinations and leg kicks on the Brazilian throughout round five, en route to earning a unanimous decision victory.