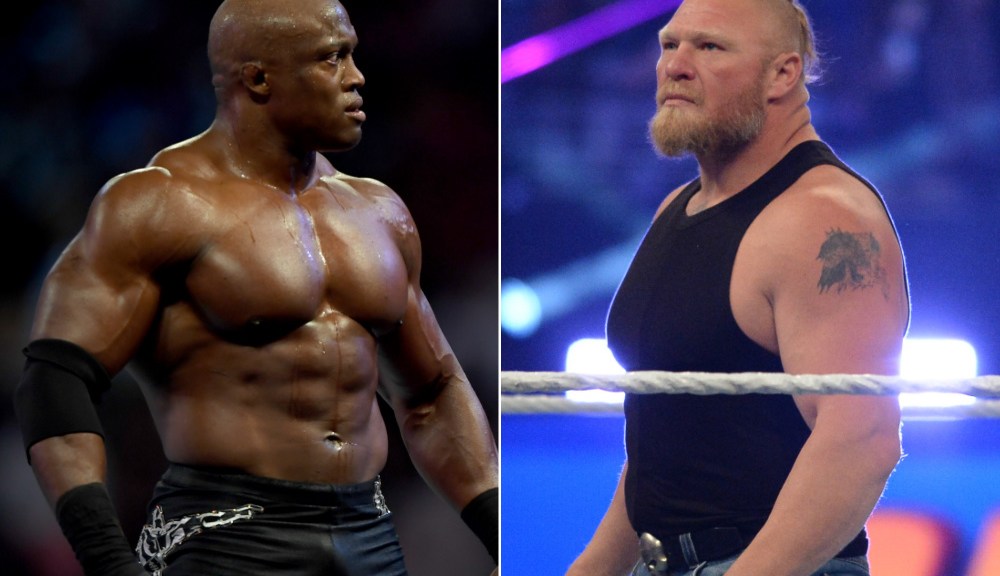 Bobby Lashley is running low on his career checklist. Saturday’s match with Brock Lesnar at WWE’s Royal Rumble is one of them.

Lashley has never faced Lesnar before in a one-on-one setting, which is somewhat surprising given their respective backgrounds in college wrestling, pro wrestling and mixed martial arts. It’s always been something that’s been pinned on his radar, but so far the stars haven’t aligned.

“Since I started when I got into WWE, there were a lot of comparisons between me and Brock,” Lashley told MMA Junkie. “Then it was so weird, because at first everyone was like, ‘Oh, Brock. Broc. Broc.’ Because we had a lot of similarities when we started. I stayed in pro wrestling and Brock was gone. He started wrestling. When I started wrestling, Brock went into pro wrestling. I never met Brock, but the media always asked me, “You and Brock? I always said the same thing: Sure. That’s obviously what the fans want.”

Even after years of asking, Lashley needed a few breaks for his matchup with Lesnar to materialize. WWE Superstar Roman Reigns’ positive COVID-19 test forced the company to upend its plans, and it opted to change to pit Lashley and Lesnar against each other for the first time.

Although their paths never really aligned, Lashley never thought Lesnar was out of the realm of possibility. It eventually materialized under the WWE umbrella in professional wrestling, but Lashley said that reunion could have happened a number of ways, including a full-fledged MMA fight.

Lashley’s MMA career lasted longer and saw him compete 17 times while going 15-2. However, he never reached the heights of Lesnar, who became UFC heavyweight champion and rocked the sport during his brief but impactful stint.

Although Lashley and Lesnar never competed in the same MMA organization, Lashley said it was something he actively campaigned for while competing for Bellator and Lesnar in the UFC.

“I thought it was going to happen there (in MMA),” Lashley said. “But I was with (Scott) Coker, and he was with Dana (White). Coker is always ready to do anything. We briefly talked about it a few times. He was open to it if there was an opportunity for that to happen.

Lashley, 45, and Lesnar, 44, may be living in the twilight years of their athletic careers to some extent, but that doesn’t dampen Lashley’s excitement. He’s keen to engage with Lesnar on a platform where their skills are arguably strongest.

“Of course I want to win,” Lashley said. “People have been waiting to keep score in this game for 15 years, and it’s been 0-0 all that time. So the first time we meet everyone is like, ‘Who’s going to win this?’ So, of course, getting that first check in this feud is very important to me.

Check out more chats with Lashley about his MMA career and his upcoming match with Lesnar in the video above.

The Royal Rumble takes place at the Dome at America’s Center in St. Louis, Mo. The entire event airs on Peacock.

Photos: Brock Lesnar over the years