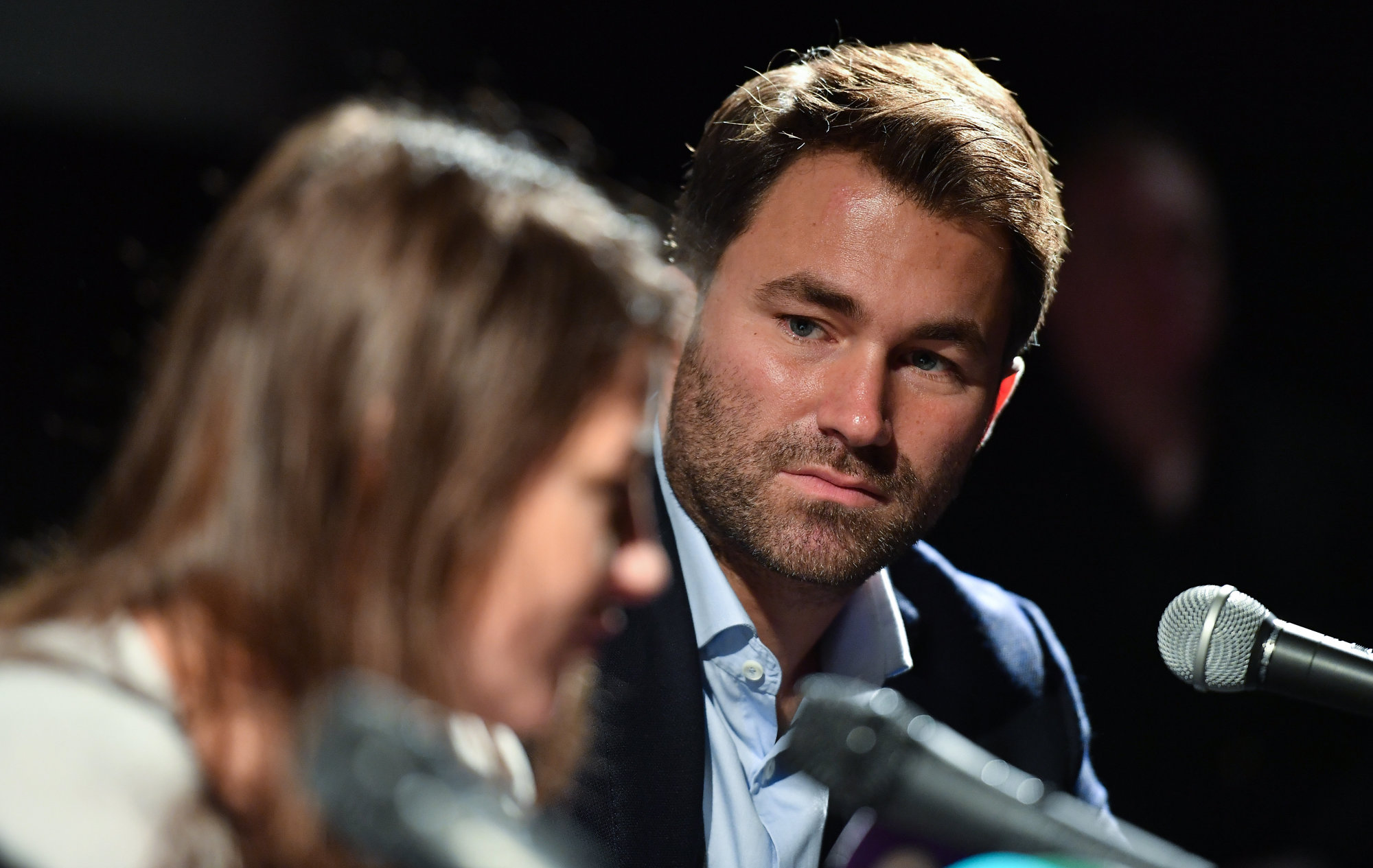 Matchroom Sport chairman Eddie Hearn is never far from the eye of the storm. The past few weeks have seen him at the center of two of boxing’s biggest stories. Hearn had pivotal roles to play in both the Conor Benn clomiphene scandal and the collapse of the Tyson Fury vs. Anthony Joshua fight. These were just two of the items on the agenda when The Sportsman spoke to Eddie for the Lightweight Boxing Show.

We spoke to Hearn ahead of Katie Taylor’s highly anticipated return to the ring this Saturday against Karen Elizabeth Carabajal. The promoter spoke to us about Taylor’s present and future, what’s next for Anthony Joshua, Jake Paul and more in a wide-ranging conversation.

This is the first time we’ve seen Katie Taylor in a ring since her instant classic with Amanda Serrano in New York. Are you excited to see Taylor again?

It’s been a tough few weeks for boxing, so I think Katie is the perfect remedy for that. She is a shining light for the sport and that night in Madison Square Garden was one of the greatest nights the sport has ever seen. There were people who were in the arena saying it was their best night watching the sport.

“She has a tough fight against Karen Carabajal because she is a mandatory challenger and she is 19-0. People assume that Katie Taylor will overcome these kinds of challenges, but I think it will be a very good fight and she is more motivated than ever to continue dominating the sport.

What do you think of the challenger, the undefeated Karen Elizabeth Carabajal?

The reason we went to this fight was because of the mandatory challenger situation. Having all those belts means you have to face all those mandatory challengers and I’m glad we have a proper challenge because sometimes you have to fight an opponent that’s not your choice and you get blamed if the fight doesn’t go down. t lives up to the hype. This fight with Carabajal is a good example of how someone earned a title shot when she got those 19 wins and she deserves a title shot.

“The problem for Katie is that a lot of these challengers will be able to fight her and really up their game. The danger for Katie is that she doesn’t raise her game because people expect her to win. Carabajal thinks “Wow, one victory and I’ve beaten a sports legend and I’m the undisputed champion”. She’s going to be very hungry and it’s going to be a tricky fight.

What about the undercard? What are you most looking forward to?

“My favorite fight on the card is definitely Kiko Martínez and Jordan Gill. This is a fight that should really make the headlines. Kiko Martínez is that little bee that doesn’t want to leave. Even when people said he was done, he fought Kid Galahad and got his ears cut off, before coming back in the sixth round and knocking him out and becoming world champion. He then came back and had a brilliant fight with Josh Warrington. Warrington won the fight, but in the process he got his jaw broken. Kiko Martínez is a horrible fighter to face and Jordan Gill will take Kiko out early in the fight, but Kiko won’t stop.

Jordan Gill’s last fight against Karim Guerfi, when he had two burst eardrums and had to sit against the ropes because he couldn’t get up, he landed that knockout punch and that was the one of the greatest wins I have ever seen. This fight will be a formidable fight.

The sportsman recently spoke with Chantelle Cameron and she expressed interest in a fight with Taylor. Amanda Serrano’s rematch is another option. What are your plans for Katie after the Carabajal fight?

The fight that Katie and all of us have our eyes on is the Amanda Serrano rematch. Even though Katie won the first fight, it was a close fight and one of the best fights anyone has ever seen. We want to do it again in Croke Park next spring or summer. If Katie can get past Carabajal on Saturday then hopefully we will open rematch talks with the Serrano team and get it done.

This Abu Dhabi show will be headlined by Dmitry Bivol’s WBA light heavyweight title defense against Gilberto ‘Zurdo’ Ramirez. Can you tell us about the map?

It’s one of the best maps we’ve ever made, top to bottom. Dmitry Bivol against Gilberto Ramírez for the WBA light heavyweight title is one of the best fights in boxing. Bivol is now the pound-for-pound star after beating Canelo Álvarez and Zurdo is now unbeaten in 44 fights and is also a former super middleweight champion.

The co-main event of this bout is the undisputed welterweight (title) bout between Chantelle Cameron and Jessica McCaskill. Incredible fight. Manchester’s Zelfa Barrett has her chance to become world champion against Shavkat Rakhimov. If you’re lucky enough to be there live or tune in to DAZN, it’s going to be a fantastic night of boxing.

If Bivol wins, do you think of a rematch with ‘Canelo’ Alvarez?

“It’s definitely a fight that Canelo Álvarez wants because he wants to avenge this loss. For Bivol it’s an interesting fight, a big money fight, but he intends to become undisputed champion in the middle division. Canelo will be watching closely next week to see if Bivol can win, but I’m sure he’ll want Zurdo to win because he’s Mexican. If Dimtry Bivol is victorious, that will definitely open talks between Canelo and Bivol for Cinco of Mayo next year.

What do you think of Tyson Fury’s third fight with Derek Chisora?

It’s tough because Derek is my buddy, but obviously I saw the reaction from the audience and how disappointed they are with the fight. The fact that Tyson has beaten Derek twice already makes the fight a tough sell. Tyson Fury was always going to pick an “easy” fight for Dec. 3 ultimately and we thought it would be Manuel Charr, but since he was met with such disdain from social media, they went with Derek Chisora. in place.

If Tyson hadn’t already beaten Derek twice, then two Brits going head-to-head is a choice we would have understood. The reason people are unhappy with this fight is because it’s an unwanted trilogy.

Do you expect the WBC heavyweight title showdown to sell out the Tottenham Hotspur stadium?

They said they already sold 50,000 tickets, so I think the fight will sell out the stadium. Tyson Fury is a big name and people know who Derek Chisora ​​is. It’s a little weird, 3rd December with no roof, but we Brits are a little crazy and think it’s funny, so we’re going to come anyway. They’ll need a solid undercard because I don’t think it’s going to break any pay-per-view records, but it could have been a lot worse. If Tyson had fought Manuel Charr, then maybe no one would have shown up.

Do you think Fury always intended to fight Chisora, or was he serious about Anthony Joshua negotiations in your opinion?

I’m sure each side is to blame for why this fight didn’t happen quickly. If you have a brain in your head then get this, we were given a one day deadline where the fight had to be signed as Tyson Fury wanted to move on and find out who he was fighting on December 3rd. Four weeks later he signed a contract for a fight with Derek Chisora, so throughout that process he negotiated with Derek Chisora.

Why were we given a deadline when Derek Chisora ​​had three or four more weeks to make his decision? That’s all you need to know.

With Fury tied up, what’s Joshua’s next move?

I think it’s more realistic that he fights early next year. Cristobal Arreola said he was negotiating a fight with AJ but we didn’t have a single conversation with him. I have no idea where it comes from.

I think the fight is Dillian Whyte versus Anthony Joshua. Dillian has his own tough fight on Nov. 26 with Jermaine Franklin, but I don’t think AJ wants an easy fight. He realizes that every side is tough and every fight is tough. He’d rather be in the biggest fight available and obviously we’re working with both guys so that’s a fight that could be done for Feb or March 2023. We’ll see if Dillian Whyte can beat Jermaine Franklin and then see if that fight can be next for AJ.

There’s a legal process going on right now with hearings and so on, but Conor Benn wants to come before the media. It’s difficult for us because I don’t mind talking about the process that went on, but I can’t talk about things that may upset his legal hearing.

From our point of view, we want his case to be heard because he is found guilty or not guilty, whether there is no ban, a six-month ban, a one-year ban or a two-year ban, until that happens, we can’t budge on. It’s all happening behind the scenes now and he’s obviously in a really big fight for his own career and you’ll be hearing from him this week as he wants to appear in front of the media as he couldn’t say anything either.

Jake Paul faces his toughest challenge yet this weekend when he takes on Anderson Silva. How do you think he’ll do?
Anderson Silva is 48 now, but he’s an MMA legend. He’s also a decent striker, and he obviously has that win over a very faded Julio César Chávez Jr. I just expect Jake to be a little too cool for him.

Looking at Jake, he definitely improves as a fighter. You can see that. He’s in good shape and a strong young man, but he probably won’t get as much credit as he deserves if he wins because the argument that he didn’t beat a boxer will stick. Silva is definitely his toughest challenge yet and if he wins he should get the proper credit.

What level do you see Paul competing at if he moves on to fight professional boxers?

I don’t think he’s terrible, but he’s definitely not going to compete at world level. Again, we shouldn’t really hit it because a lot of fighters try to compete at the world level but won’t make it to that level either, and that’s no shame because it’s a very hard thing to do. He is improving and he has dedicated his time to the sport. Good luck to him.

*18+ | BeGambleAware | Odds are subject to change

The historic IMMAF Asian Championships are about to begin in Tajikistan

Fighters and fans congratulate John Anik on re-signing with UFC; “The best shot of the year!”