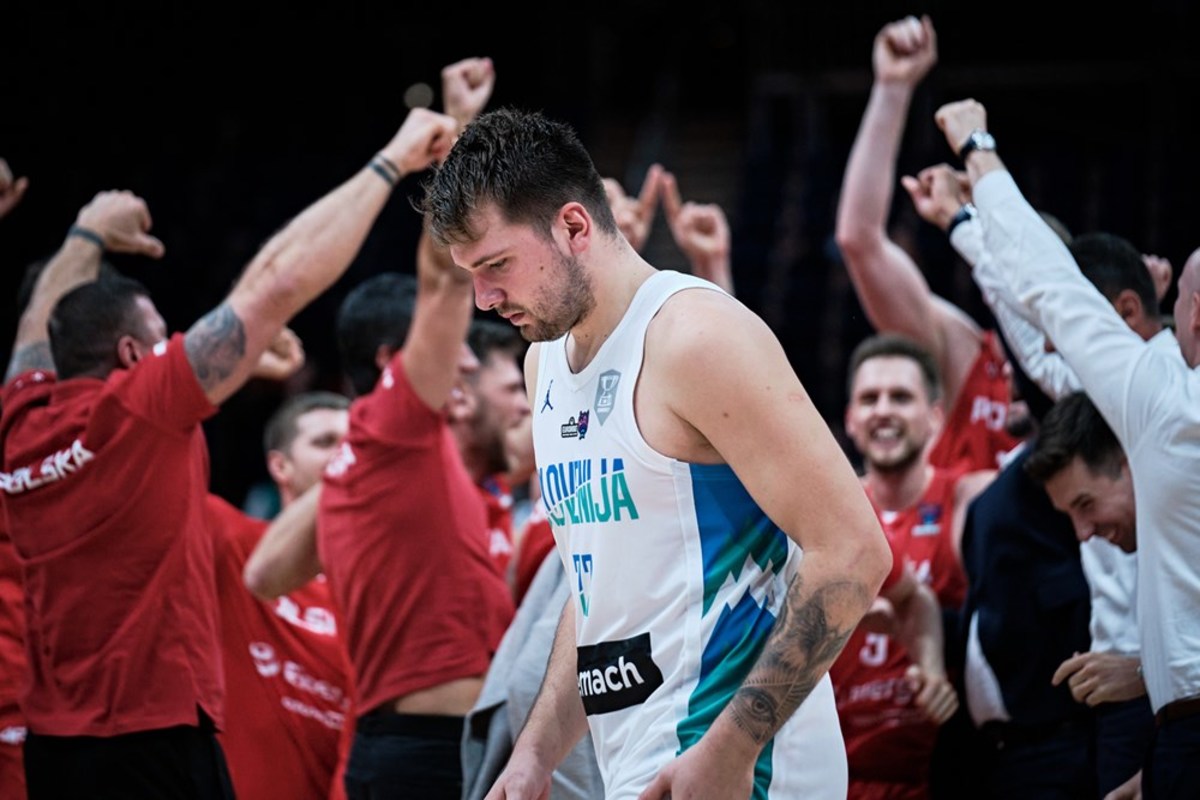 Whether you’re at the end of your coffee, your day, your week or even your rope party, welcome to Whitt’s End…

*Luka Doncic is upset that he played poorly in Slovenia’s upset loss to Poland at EuroBasket. But, selfishly, we are happy. Hurt feelings he can get over; an injury could have transformed the franchise.

The next time he tries it will be for the Dallas Mavericks. They open the 2023 season in just over a month (October 19) in Phoenix. Phew.

*Roger Staubach did not. Neither Troy Aikman or Tony Romo or Dak Prescott or, for that matter, anyone else except three NFL quarterbacks. But something weird tells me that Cooper Rush is about to do it to join Cam Newton, Kyler Murray and Justin Herbert. That is to say throw more than 300 meters on each of his first two starts.

In his only previous start, Rush replaced the injured Prescott and threw for 325 yards and two touchdowns in the win over the Vikings in Minnesota last Halloween. I’m not saying the Cowboys will beat the Cincinnati Bengals on Sunday at Arlington, I’m just predicting Rush will hit 300. More hunch than head.

*Remember when Prescott’s greatest asset was its durability? After making 69 straight starts to start his career, he’s only played 18 of 30 games since his horrific ankle injury in October 2020. He could be 18 of 36 by the time his thumb heals.

*I keep squinting for the positives in this blindly disastrous season of the Texas Rangers and… the center of attention, Josh Jung. Their 2019 draft pick from Texas Tech climbs the ranks among the minors and makes a smash debut at Arlington with a team-high five extra hits in his first six games. Until further notice, he’s the Rangers’ third baseman of the future – and present.

*Speaking of the Mavs, their flagship radio station is getting a dramatic facelift. 97.1 The Eagle parted ways with their longtime brass band this week and, according to industry sources, will switch formats from hard rock to hardcore talk in the coming week. The remains of the old Russ Martin Show – including my old pal Dan O’Malley – were also released.

Given the radical ratings struggles of Ben and Skin show, it’s an interesting strategy for leaning into even more goofy conversations. But apparently the plan is to try to duplicate the old format of Live 105.3, which had success in the early 2000s before transitioning to sports in the form of 105.3 The Fan in 2008.

*With the passing of SMU superfan Paul Layne this week, one of DFW’s most impressive streaks has finally come to an end.. Layne, who I profiled in the Dallas Observer in 2020, attended – yes, in person – 542 consecutive SMU football games before a blood clot sent him to intensive care recently and ultimately led to his death. He started his streak in 1972 as a freshman cheerleader at SMU. Layne was 68 years old.

*So as not to tarnish its reputation while the body is still hot, but I racked my brains all week trying to figure out what Queen Elizabeth II actually achieved in her lifetime. I get it, she “leaded with class” and met tons of American presidents and lived to be 96, but… Maybe I need to look The crown on Netflix.

Instead, I texted my longtime pal Paul, who grew up in Wales.

His response: “It’s confusing for all of us. The best I can assume is that she was put on Earth by Jesus to lead the Commonwealth in the right ways within a dysfunctional family. But it’s quite confusing because the monarchy is a miserable institution.

Yeah, what he said.

*Even with a lackluster loss, the Cowboys remain a TV ratings bonanza, earning the biggest Sunday night football audience since 2015 when, of course, they also performed. But the University of Texas outplayed them, losing to Alabama in the most streamed football game…ever.

*If all the critics were right that Jerry Jones favored style over substance and vavoom over victories, we’d be read this headline following Prescott’s injury: ‘Cowboys sign Colin Kaepernick’. But we are not. So, again, it doesn’t.

*I took a friend for a colonoscopy this week. After – just like I experienced when I had one at 50 – she had no pain or discomfort or signs that anything was, you know, up there. We are led to ask ourselves: are colonoscopies a scam? The docs knock you out for 20 seconds, then tell you it was two hours, show you pictures of the inside of a random colon – like you can choose yours from a queue? ! — and charged you $3,000.

*Dak’s absence – even if only for a month – offers coach Mike McCarthy a mulligan this season. How can a coach, for crying out loud, be held accountable for the results without his star quarterback? (Answer: He will not.)

*The Rangers season in brief: This week, star slugger Marcus Semien didn’t realize it was his turn to bat. More embarrassing: None of his teammates paid enough attention to know either.

Not exactly a perfect public service announcement to edge your baseball excitement.

*Before y’all are woe betide me thinking you have a bad luck spell, sit down with my brother. Over the past 16 months, he has seen his building burns to the ground and had two cars in total: one after being stolen and one by torrential flooding last month.

*Of Robert Sarver to Daniel Snyder to (sort of) Mark Cuban to From Donald Sterling to Jerry Richardson, sports owners these days are filthy. Right? Can I introduce you again Marge Schott?

*DFW’s most successful current athlete is set to be under the international spotlight. Boxer Errol Spence Jr. is scheduled to fight Terence Crawford on November 19 in Las Vegas. At stake: the undisputed welterweight championship and the unofficial title of “best fighter on the planet”. Crawford is the No. 1 pound-for-pound boxer; Spence No. 3. This won’t be one of those Pacquiao-Mayweather fights after their heyday, or some stupid Jake Paul fabricated “fight”. It will be a boxing match that star athletes from all sports will stop to watch.

*One of the coolest moments of my sportswriting career was being in Atlanta for the 1996 Olympics and chronicling the dominance of Dallas sprinter Michael Johnson. World records. The golden shoes. The mind-boggling ease of effort to accomplish difficult, so… fast tasks. Crazy to learn that the world’s fastest former human nearly died of a stroke in 2018. After a routine workout, he thought he had cramps before realizing he had to go to the hospital. Only 50 at the time, he lives to tell his story. And this weekend he will be a motivational speaker for some of America’s top athletes at the Professional Triathlete Organization’s US Open in Las Colinas. Johnson ran the 200 meters in 1996 in 19.32 seconds. After his stroke – with the help of a walker – he started walking again covering the same distance in 10 minutes.

But nothing was worse — perhaps all year — than No. 6-ranked Texas A&M losing at home to Appalachia State.

Even a higher recruiting class won’t be scented enough to camouflage this stench. But, speaking of upsets, I wouldn’t be shocked if UT-San Antonio waltzed into Austin and beat Texas on Saturday. The Longhorns are due for emotional disappointment, playing without their star quarterback and playing against a boosted opponent for their game of the century led by do-it-all quarterback Frank Harris. Watch out, orange bloods.

*Let me try to get this straight: There are people who are stunned that Texas Governor Greg Abbott is sending busloads of immigrants to different cities while fiercely defending Steve Bannon, even though he stands trial for stealing their donations that were supposed to help build a border wall that Mexico was going to pay for. and it was promised to keep said immigrants away in the first place.

Conclusion: People are inexplicably mad at a guy accused of charity fraud, even though he stole their money and didn’t build a product that didn’t work. Shouldn’t they be mad at him?

What am I missing? Fortunately, everything. Every bit of it.

*If you dare to see my thoughts on Cowboys-Bucs, they are here.

*Serena Williams. Roger Federer. Rafael Nadal. The sun sets on tennis’ greatest era. But, despite Frances Tiafoe’s fiery run at the US Open last week, the next decade will be dominated by ‘Righty Rafa’ – better known as Spain’s Carlos Alcaraz. In tennis related news, the WTA is moving its prestigious year-end finals from China to a place where anti-abortion laws lead to frightening health issues for women: Texas, specifically Fort Worth. For one of the most successful and progressive women’s organizations on the planet, it’s a curious choice to say the least.

*You never expect “the wrong place, the wrong time” to be in a respected hospital, but if you’ve been to Baylor Scott & White in North Dallas in the past couple of years, it certainly could have been. A doctor there who was recently arrested for his alleged role in the deaths of several patients has a disciplinary record with the Texas Medical Board, a criminal history for assault and animal cruelty and the IRS said he owes over $4 million in unpaid taxes. Another example of how life is not black and white. This occurs in different hues and shades of gray. Put athletes on pedestals, blindly support blue, and make every doctor a hero at your peril.

*Remember when the biggest kerfuffle in town was when the two toughest fifth graders agreed to fight behind the canteen after school? Somewhere along the way, we became an angry, violent, and dangerous society. Seems every week ago another fight at a youth sporting eventand the FAA reported that in 2021 there were 6,000 incidents of unruly passengers on flights.

Are there more fights? Or simply more cameras to record the fights?

*This weekend? Friday is tennis. Saturday is for an end-of-summer pool party. Sunday is for the Cowboys-Bengals. As always, don’t be a stranger.