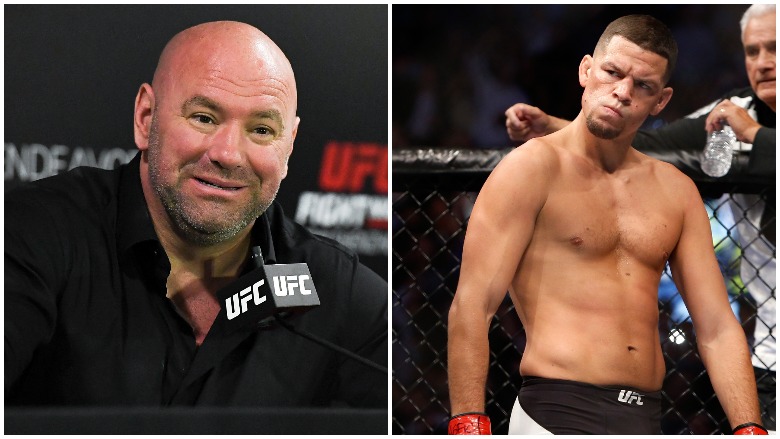 Dana White is “100%” for Nate Diaz vs. Khamzat Chimaev

UFC President Dana White knows which direction he wants to go with Nate Diaz for his next fight.

If the UFC president gets what he wants, Diaz will fight the promotion’s fastest rising star, Khamzat Chimaev.

Chimaev returned to the Octagon after a year away from the sport and absolutely dominated 11th-seeded welterweight Li Jingliang. He smothered “The Leech” in the first round without absorbing any punches from the ranked fighter.

White recently spoke with TMZ about Chimaev and said Borz is the most dominant fighter he has ever seen in four fights.

â€œ100%,â€ White said. â€œThis guy is unlike anything anyone has ever seen. When you think about it, he has more UFC wins than he’s been touched inside the Octagon. is crazy. “

White also said the UFC broadcast Chimaev’s UFC 267 walkout on Instagram Live and broke his record, saying it was the “biggest” they’ve ever done.

White was then asked if he was going to take a look at Diaz fighting Chimaev as Borz challenged the UFC veteran in the post-fight press conference.

And if Diaz is “down” for the fight, White has said he will get there.

The next time Diaz steps into the cage, it might be the last fight of his UFC contract. It is common knowledge that Diaz has just one fight left and it is not clear whether the promotion and Diaz will negotiate a new deal.

He’s 0-2 in his last two fights, losing to Leon Edwards and Jorge Masvidal, but Diaz continues to be one of the biggest names in the UFC.

Here are the results of the full UFC 267 fight card: