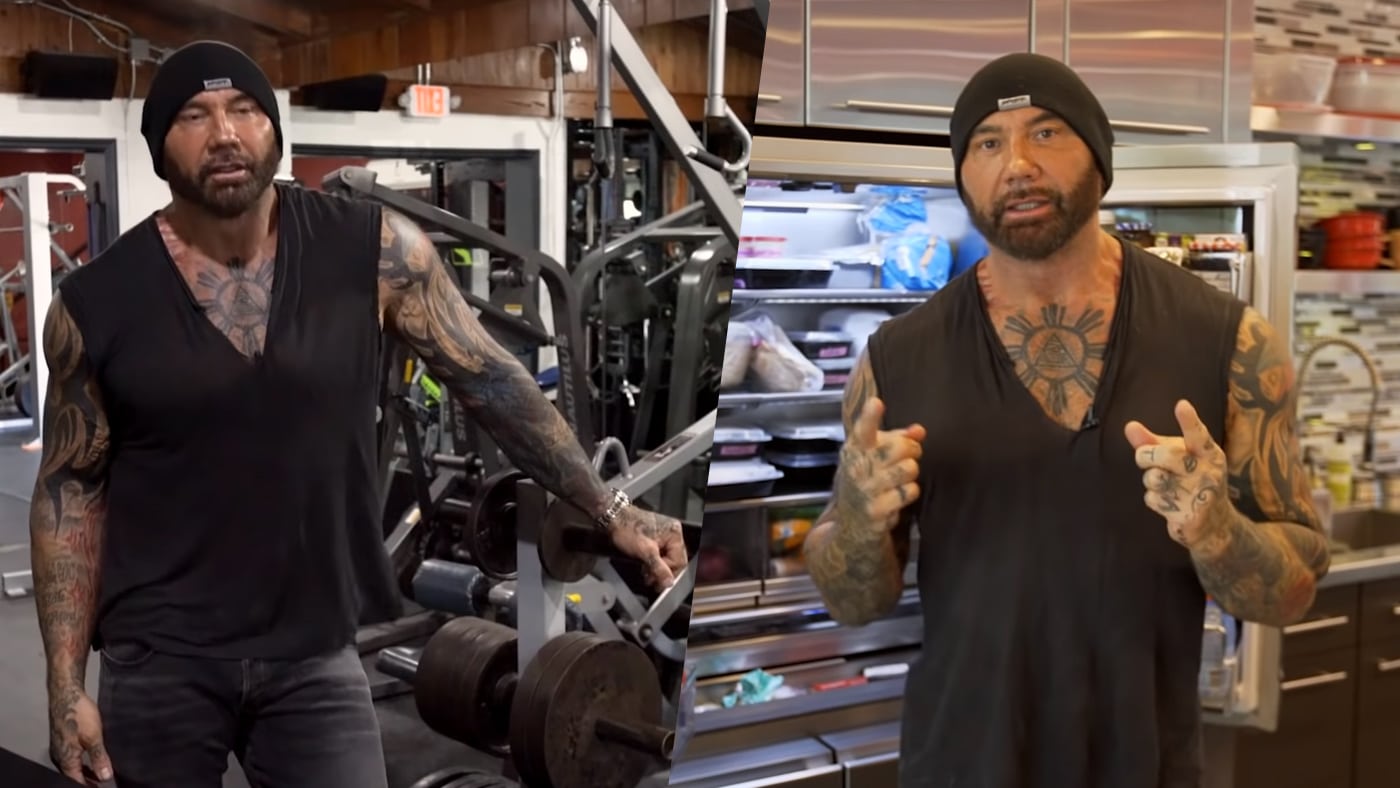 Actor David Bautista is known for his muscular physique and equally impressive athleticism for someone who is 6ft 4in tall and weighs 240s. The 52-year-old former wrestler made the transition to acting at a relatively late stage in his life. However, looking at his level of fitness and continued success in Hollywood, one can’t help but wonder how he manages to keep himself in that shape. In a recent video interview with Men’s Health, David Bautista took a tour of his gym, shared his diet and fitness routine.

In the first segment of the video, David Bautista showed off the refrigerator in his kitchen and explained how his food preferences have changed over the years. Like any young man obsessed with bodybuilding, Bautista followed a high protein and calorie diet early in his life.

However, after starting Brazilian Jiu-Jitsu training under Caesar Gracie in 2010, Bautista leaned towards a predominantly plant and pescetarian diet. He completely eliminated red meat from his diet ten years ago.

The 52-year-old man generally eats healthy foods. Her regular meals include rice and beans, fish (twice a week), and eggs for breakfast. David Bautista suffers from chronic asthma and has eliminated dairy products from their diet since 2005.

Bautista’s impeccable physique and martial arts background is an important aspect of his acting career, as the former professional wrestler works mostly in action movies. In the interview, Bautista revealed that he is contractually obligated to eat at least every four hours to maintain his muscular appearance! During film shoots, David Bautista uses meal preparation services to meet his dietary needs.

David Bautista’s muscular physique has always been the benchmark in fitness for men around the world. It would have been surprising if the former WWE Champion didn’t allocate enough space for his training needs in his house. Bautista’s gym has two separate floors dedicated to bodybuilding and martial arts practice. According to him, the gym is not necessarily a place for him to keep in shape, but a place where he has peace of mind.

David Bautista came to WWE as a heel character with a menacing physique. Therefore, it was natural for him to be obsessed with optics early in his career. However, his fitness priorities have changed over the past two decades. David Bautista said chronic asthma has forced him to focus more on improving his cardio lately. Regardless of movie roles, Bautista mostly follows a consistent workout routine with little change. However, he admitted to adopting a different training program for his portrayal of Drax the Destroyer in the Marvel movies.

The 52-year-old former professional wrestler tried his hand at mixed martial arts in 2012 when he defeated Vince Lucero via a TKO in the first round. Brazilian Jiu-Jitsu purple belt, Bautista believes he is a natural wrestler. Although uncomfortable, he also likes to train regularly in boxing.

“Boxing is all kinds of clumsy. But I’ve been obsessed with boxing since I was a kid. I like to do it. It just takes me to a better place mentally, it puts me in great shape physically. Said David Bautista.

Asked about his idea of ​​intense training, Bautista said combat training is by far the most intense form of training he has ever experienced. He tried to explain the intensity of a typical five-minute round in combat sports.

“Combat training is the hardest training I have ever done. It’s a HIT workout while you get a punch in the face. It sucks. I don’t think people realize how exhausting a five minute round is. It’s absolutely, it’s the most exhausting thing I’ve done in my life. Watching these guys take a five minute ride like – I know what they’re going through. It’s just something you have to stick to. said David Bautista.

What is David Bautista’s fitness goal?

None of the things mentioned above can deliver the desired results without motivation and a goal-oriented attitude. David Bautista has gained immense popularity thanks to his career as a wrestler and actor. This naturally leads us to ask ourselves: what could potentially keep him going at this point in his life?

Bautista believes he is a late bloomer and that staying healthy to advance his acting career is his main focus to prioritize fitness.

“You know I hit my rhythm later in life and I want to make the most of it. So you know to stay young and healthy, rejuvenated and whatever makes me feel good about myself. , but also continue my career. It is invaluable to me, said David Bautista.

3 reasons to watch Bellator 268 on Showtime this Saturday