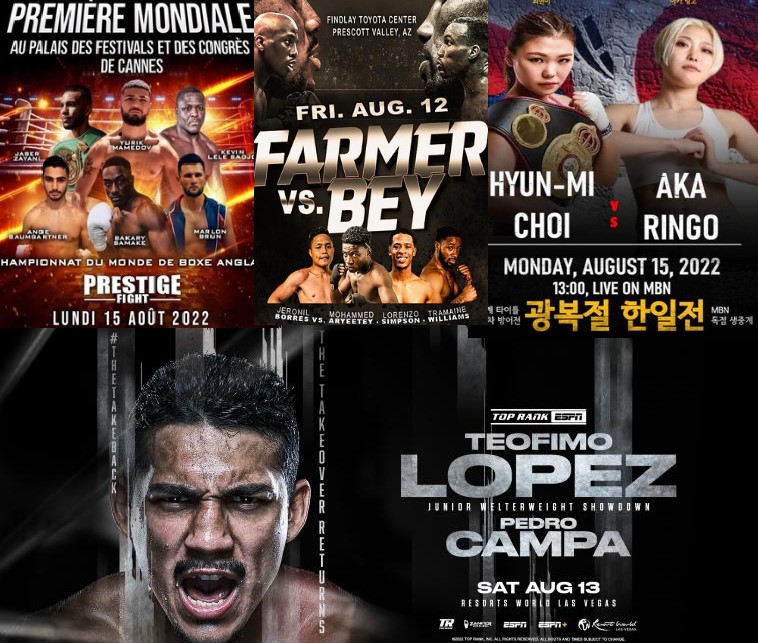 Farmer has boxing in his DNA (he’s related to the great Joe Gans) and his talent is undeniable, but he’s not exactly an exciting fighter to watch. Bey should be able to incorporate that factor into the fight and make it interesting. Not bad at all.

Where to watch it: Redemption PPV

Lopez is probably the most entertaining and one of the few go-to fighters today. Campa is a solid test at this point in his career as Lopez looks to re-establish himself as a pound-for-pound talent.

Puerto Rican boxing’s new Boy Wonder has another chance to improve on his unbeaten record after the disappointing cancellation of his June fight in New York.

Where to watch it: ESPN/ESPN Sports/ESPN+

Powerful Ecuadorian puncher Gongora has just been signed by promoter Lou DiBella, which is always a signal for us to start paying attention to his career. We certainly will. And you too.

Where to watch it: FightSportsNow

Ferrer, once beaten, gets a stern test at Velez, a once-promising Puerto Rican contender who still comes to fight. The undercard shouldn’t be too bad either, with plenty of young talent making their mark.

Where to watch it: FITE+

Too bad there’s no TV planned for this pair of interesting matches. Worth looking up on YouTube on Monday.

Hard to disagree with Mikaela Mayer in her assessment of Choi: ‘(She) needs to be stripped of her belt,’ Mayer says of current North Korea-born WBA title roster who defected to Korea from the South at an early age. “She’s fighting sub-par opponents, and she’s holding this division back and holding women back in this sport as a whole.” This “title defense” against a 3-0 opponent could only have been endorsed by the WBA, and it doesn’t help Choi’s case at all – or women’s boxing, for that matter, at all.

Where to watch it: Your guess is as good as mine

Diego M. Morilla has been writing for The Ring since 2013. He has also written for HBO.com, ESPN.com and numerous other magazines, websites, newspapers and other media since 1993. He is a full member of the Boxing Writers Association of America and an elector for the International Boxing Hall of Fame. He has won two first place awards at the BWAA’s annual writing competition and is the moderator of The Ring’s Women’s Review Panel. He was copy editor for the second era of The Ring en Español (2018-2020) and is currently a writer and editor for RingTV.com. Follow him on Twitter @MorillaBoxing