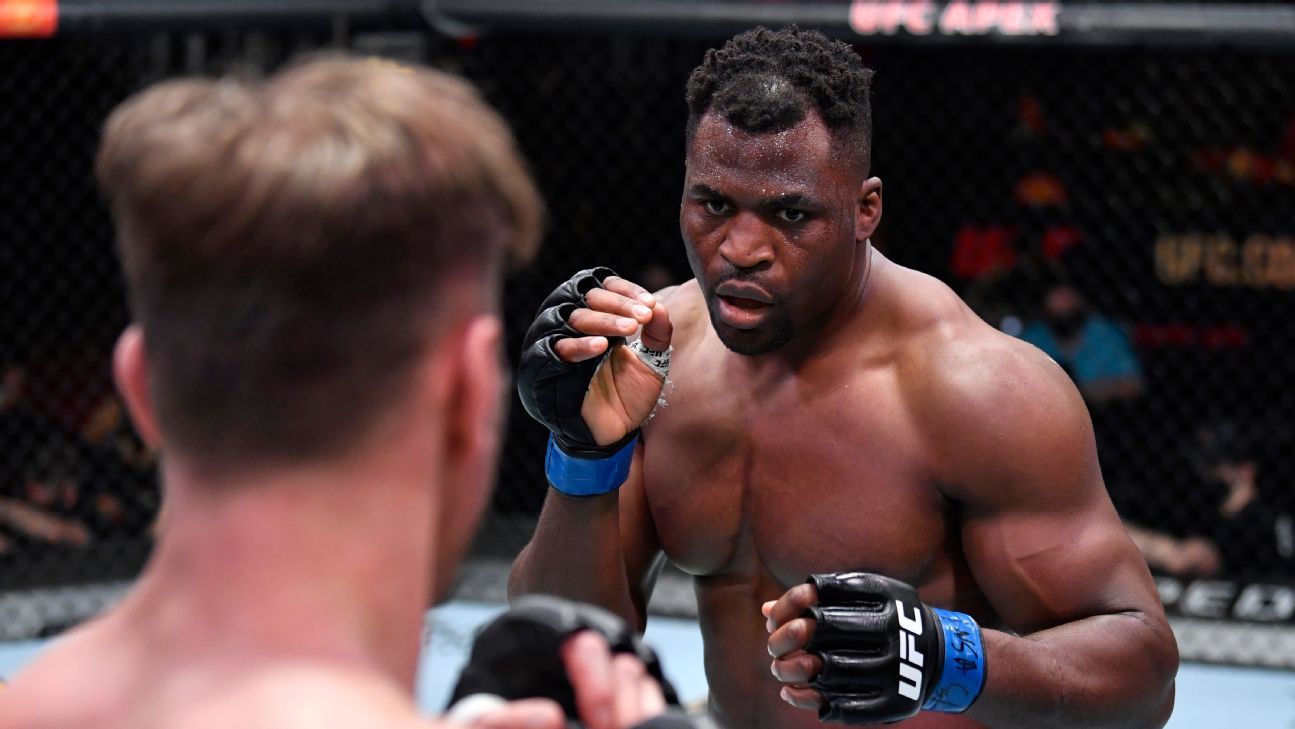 This fight is one of two title fights on the card at Honda Center. In the co-main event, roster of men’s flyweight titles Brandon Moreno takes on the man he took the belt from, Deiveson Figueiredo.

The action begins at 6 p.m. on ESPN+ with early prelims. These are followed by more prelims on ESPN and ESPN+ at 8 p.m., and pay-per-view starts at 10 p.m. on ESPN+ PPV. Buy the PPV here.

Ngannou (16-3) has won five straight fights, all by knockout. His last knockout came last March, when he took the title from Stipe Miocic. Ngannou is tied for fourth in the ESPN pound-for-pound men’s rankings.

The undefeated Gane (10-0) has won seven times in the UFC, most recently in August when he scored a third-round TKO of Derrick Lewis to capture the interim belt. Gane is No. 2 in the ESPN heavyweight rankings, behind Ngannou.

Moreno (19-5-2) is unbeaten in his last seven fights. His last two fights were against Figueiredo – a majority draw in December 2020 and a third-round submission win that gave him the 125-pound belt. Moreno is No. 8 in the ESPN pound-for-pound rankings.

Figueiredo (20-2-1), who is ranked No. 2 at flyweight by ESPN, had won five in a row before the first meeting with Moreno.

How to watch fights

Watch the PPV and all the other fights on ESPN+: Get ESPN+ here.

Bought the fight on your phone and want to stream it to your TV? Find out how here.

There is also FightCenter, which offers live updates for every UFC card.

Another heavyweight title fight, another dethronement?

Ngannou vs. Gane will be the UFC’s fifth heavyweight championship bout in Anaheim, Calif. Each of the previous four saw the belt change hands.

Tim Sylvia vs. Andrei Arlovski (UFC 59 April 15, 2006): Sylvia knocked out Arlovski in the first round to become UFC champion just over a year after Arlovski defeated him for an interim title. Arlovski would win the belt less than three months later, and when they met for the fourth time in 2012, the fight was declared a no contest due to an illegal soccer kick by Arlovski.

Cain Velasquez vs. Brock Lesnar (UFC 121 Oct. 23, 2010): Velasquez dethroned Lesnar by first-round knockout in a dominating performance that seemed to signal a long reign as champion. Up to …

Stipe Miocic vs. Daniel Cormier (UFC 241 Aug. 17, 2019): Thirteen months after losing his title to Cormier, Miocic turned things around with a fourth-round knockout. When they met for a third time a year later, Miocic successfully defended the belt.

How the pundits see the title fights unfolding

“I think Gane is better in every way, but [Ngannou] got that kiss of death,” said James Krause, trainer at Glory MMA in Kansas City, Missouri. “I feel like one thing Francis has done a better job at is throwing more non-binding shots now. Xtreme Couture trainer Eric Nicksick did a good job with this. He throws more jabs. Not everything has to be killed, but when it connects, you don’t know what punch is going to knock your mind off.”

“There are really no more surprises. They spent a lot of time together in the cage,” said Marc Montoya, coach of Factory X in Englewood, Colorado. “The movement, the speed, the power, the grappling, you kind of know at this point. Now it will depend on the athlete who shows up that day. The path to victory for Moreno is to repeat what he did in their second fight. To continue using the body lock and have some kind of surprise in his fight when the body lock doesn’t work, because Figueiredo had to work on that. If he didn’t fact, it’s a total mistake.

For more details on the best MMA trainers, check out our expert picks article, which will be on ESPN+ on Friday.