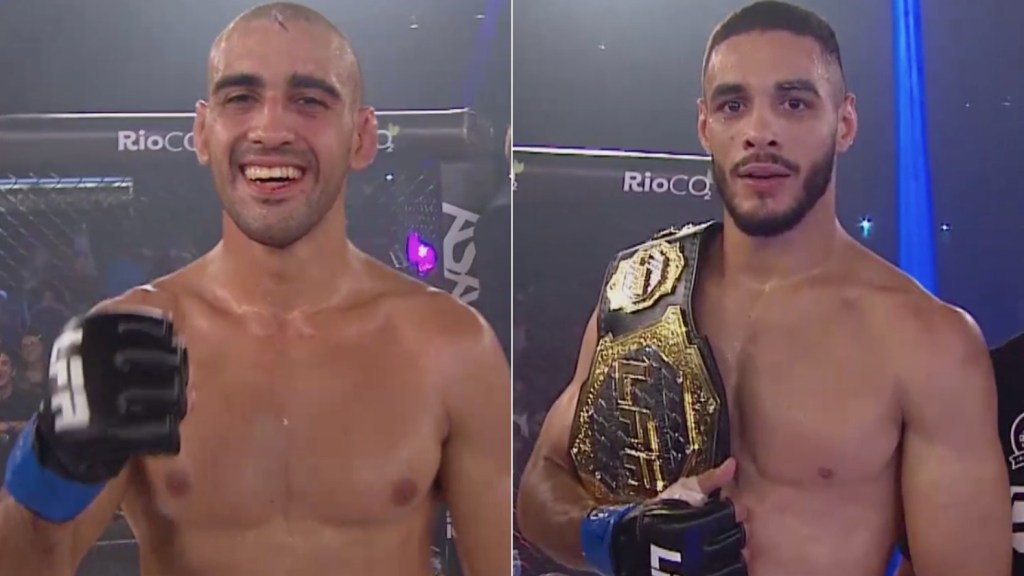 A previously vacant title now has a Brazilian owner after LFA 126, which took place Friday at Complexo Ribalta in Rio de Janeiro, Brazil.

Delano wasn’t even originally slated for the five-round main event. He prepared for a main card opener, for which he lost six pounds on Thursday. When originally scheduled fighter Rafael Barbosa was pulled by CABMMMA (sanctioning body), Delano stepped in but was ineligible for a title shot in a last-second elevation in the headliner bout.

The first two rounds were hotly contested as Delano led the way and bloodied Bilharinho. In round 3, Delano dragged the fight to the canvas and remained top heavy.

The fighters moved into the championship rounds and Delano continued to make things ugly. He tied Bilharinho in the clinch, but ate a big head-splitting elbow. Blood flowed from the middle of his forehead as the beatings resumed. The final round was perhaps the fiercest of the fight, as both bloody fighters landed some crazy strikes in the closing seconds. When the dust settled, Delano had some new hardware.

After the fight, Delano vowed to gain weight in his next outing, if the LFA granted him another opportunity.

The loss stings for Bilharinho, who many fans thought was snubbed on DWCS in 2021. Bilharinho landed a highlight wheel kick on the show, but was not granted a contract by the UFC president.

In the co-main event, Gabriel Bonfim (12-0) made a major statement in a big way. Going into the fight with an extremely lopsided record, Bonfim pulled away when he pieced together Eduardo Garvon (13-4) on the feet before sinking into a deep choke by D’Arce. The tap came soon after and made Bonfim the seventh welterweight champion in LFA history.

What a great night to be a Bonfim!!

Before the titles were on the line, other rising Brazilian prospects made the most of their moments in the spotlight on an international stream.

Heavyweight Eduardo Neves (5-0) remained undefeated with a violent flurry of punches that marked the beginning of the end for previously undefeated Andre Vieira (4-1). Neves finished the fight 64 seconds into the first round.

Bantamweight Tamires Vidal (6-1) showed off her submission skills when she pulled off a slick heel hook in the second round against Queila Braga (5-2).

In the main card opener, Rodolfo Vieira (8-1) maintained his winning ways with a buzzer-beating triangle choke against Thiago Vieira (11-5).

The event marked the promotion’s second trip to Brazil after two events in one weekend, LFA 111 and LFA 112 in July 2021. The internationally broadcast platform is somewhat unique for talent in Brazil. Although the country has produced many UFC fighters, many enter the promotion with little or no internet fight tape.

LFA CEO Ed Soares, longtime manager of legendary Brazilian fighters Anderson Silva, Lyoto Machida and Antonio Rodrigo Nogueira, among others, has indicated that Brazil will be a regular in the promotion’s rotation from now on. LFA plans to return in May 2022.