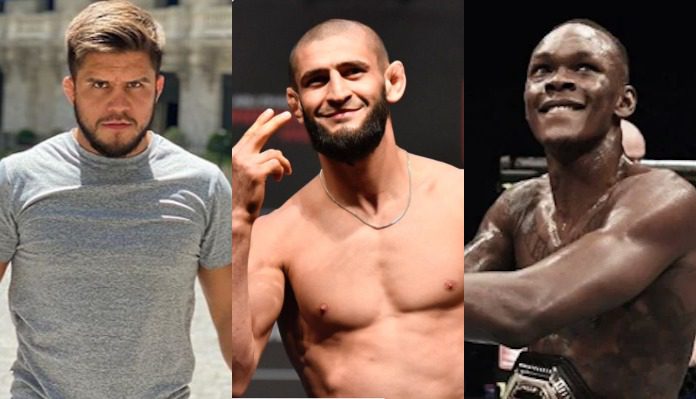 Henry Cejudo said he would be willing to train Khamzat Chimaev for a fight against Israel Adesanya, but not Kamaru Usman.

In his post-retirement career, Henry Cejudo has been busy dividing his time between hosting podcasts and training some of his fellow UFC fighters. The former two-weight champion may yet return to the Octagon one day, but for now he seems quite content with his situation.

One man you think is quite ready for a championship run himself is Khamzat Chimaev. “Borz” is gearing up to face Gilbert Burns on April 9 and if he wins that fight, there’s every chance he could go on to challenge for the UFC welterweight title.

In one recent episode from The Triple C & Schmo Show, Cejudo explained why he would be willing to train Chimaev at welterweight but not middleweight.

“The only problem is I can’t train Chimaev, he’s going to fight The Nigerian Nightmare! But I would train him to fight that damn Israel lasagna guy. I will definitely help you with this one, but if you are going to fight The Nigerian Nightmare man, I will be out. It’s all your brother. Either way, Khamzat Chimaev is the real deal, but so is Gilbert Burns and we’ll find out at UFC 273 to see if he’s the real deal – which we think he is.

While a move to 185lbs could certainly be in Chimaev’s future, he can’t afford to look past someone like Gilbert Burns. He’s going to be the favorite in the eyes of many, but as we’ve learned, Burns thrives in the underdog role.

Do you think we will see Khamzat Chimaev or Henry Cejudo fight for a UFC title before the end of 2022? Let us know your thoughts in the comments, BJPENN Nation!