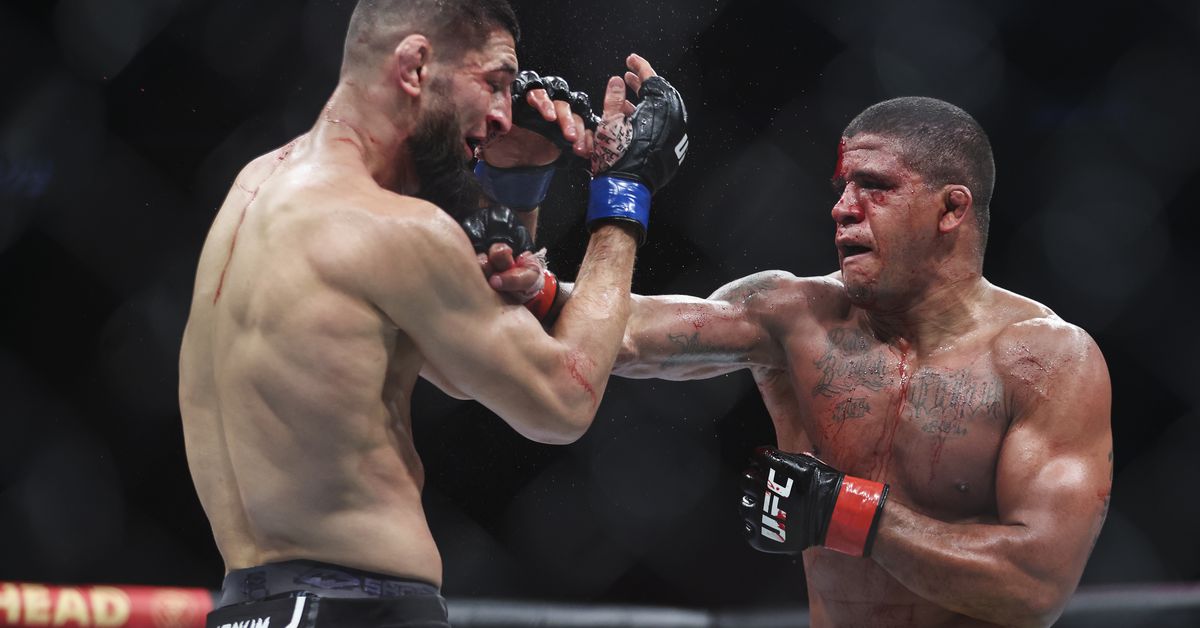 With UFC 273 now in the rearview mirror, this week has felt a lot like a post-pay-per-view lull, in part because this weekend’s card, UFC Vegas 51, is one of those hottest deals. less convincing than the UFC has offered. year. No disrespect to the beautiful men and women fighting on Saturday, but the co-main event features two Competitor Series signers who have never competed in the UFC before. It’s not a great look no matter how you cut it.

Fortunately, we still have the fallout from UFC 273 to discuss, and while the rest of the card may lack excitement, the main event of UFC Vegas 51 includes the scrapping of two welterweights from elite. So let’s go after.

What is a worse idea; Cejudo vs Volk or Volk vs winner Oliviera/Gaethje??

ICYMI: Alexander Volkanovski retained his featherweight title with a dominating performance over The Korean Zombie (Chan Sung Jung), and immediately after, Henry Cejudo once again tried to interest the public in a fight between the two. Meanwhile, Volkanovski tried to convince himself and the rest of the world that people were dying to see him at lightweight next.. Neither man succeeded in their attempts.

Neither is a particularly bad idea, they’re just ideas that aren’t as compelling as their proponents would like them to be. But if I have to live with one of them, I would prefer Volkanovski at lightweight. And coincidentally, that’s one that’s much more likely to happen.

Here’s the thing about Cejudo: He handled it all as badly as humanly possible. First off, Cejudo adopted his “King of Cringe” persona, which is historically a bad way to try to make himself interesting/promoted – he’s not a character people will love or hate. It is the one who, at most, will annoy people. Annoyance does not sell pay-per-views.

Then, having “saved the flyweight division” – something die-hard fans were basically in favor of – Cejudo cut the bait and bailed out, only staying long enough to fight TJ Dillashaw in a superfight that would allow him also, conveniently, to guarantee himself a bantamweight title if he won. He then moved up, brought it to Marlon Moraes to win the vacant title, then fought Dominick Cruz for his only defense of the bantamweight title, when Cruz hadn’t fought in three and a half years and had just lost ! (Oh, and before that he was supposed to face Jose Aldo, who also just lost). Then he retired, proclaimed himself the greatest combat sports athlete of all time (he’s not), and spent his entire retirement talking about people. he chose not to fight.

The problem is, Cejudo’s schtick is unabashedly selfish and undermines everything he wants to do. He claims to be the greatest combat sports athlete of all time, but he has no interest in proving it by defending his bantamweight title against the best in the world. Instead, he wants to move to the front of one of the sport’s deepest splits entirely based on wins over Marlon Moraes (WOW, that one hasn’t aged well) and Dominick Cruz, because he knows that fighting Arnold Allen or someone is hugely risky without the upside-down “three-time UFC champion.”

In short, Cejudo went career-ending with Floyd Mayweather without actually having Mayweather’s popularity. He may have been making people care about him, but then he got up and retired just when his career got really interesting! Seriously, Cejudo couldn’t have made worse decisions when it comes to fan interest over the past two years.

Volkanovski, on the other hand, may not be doing everything right, but at least he’s not screwing up the important part. He continues to defend his title (already more defenses than Cejudo had in his two divisions combined) and in doing so, the idea of ​​challenging him for the lightweight champion will come, because eventually there will be no more of convincing matchups at 145. Now the way Volkanovski oddly continues to not sell Max Holloway remains frustrating as Holloway is the opponent fans are BY FAR most interested in him. But still, he’s not calling for a fight with Urijah Faber or anything like that.

The reality is, Cejudo can say whatever he wants – he’s not fighting Volkanovski unless he’s fighting another featherweight contender. But he will never agree to that. Meanwhile, Volkanovski is going to defend his title one or two more times and then he’ll probably get a chance at the light strap because being about that lifetime of champion always means something in this sport, at least, when a million pay-per-views don’t get in the way.

any thoughts on UFC possibly matching Yan/Merab? I’m just saying that Yan’s poor judgment/illegal knee could be the most costly and costly derailment in the history of the sport.

ICYMI: Aljamain Sterling did the damn thing, winning a split decision over Petr Yan to retain his bantamweight title and silence (for now) his many haters.

First, talk your shit, Aljo. Talk about it for as long as you want. No one can tell you not to. You did it.

Second, yes, Yan definitely needs to kick himself about that illegal knee now. If he hadn’t dumped him, in all likelihood he would have won that fight and he wouldn’t have had to fight Sterling again so soon, if ever. Instead, Yan would still have the bantamweight title, he would have multiple title defenses under his belt, and he would be the one to fight TJ Dillashaw instead. It’s a game of thumbs.

Third, I think Yan versus Merab Dvalishvili makes a lot of sense, and maybe that’s what will happen next, but I’m against it for one simple reason: if Yan beats Dvalishvili, that should trigger another fight with Sterling, and we don’t need to run a third fight right now. Let the two men do something else for a little while. For Yan, that something should be the winner of Rob Font against Marlon Vera. The winner of this will be No. 5 in the UFC bantamweight rankings and would present both an opportunity for that fighter and a fitting step back for Yan. Let Merab fight Cory Sandhagen, then Yan can fight Merab to set up the three-way match. If that even happens, because I have to be honest, I’m SUPER interested to see the next phase of Petr Yan’s career now.

I am officially convinced that Yan is one of the most skilled fighters in the world, pound for pound, but I have real questions about his game going forward, namely, what will he be like if he is back in three-round fights? Yan isn’t necessarily a slow starter, but his style is one that picks up momentum over time as he reads and adjusts (he won the fourth and fifth rounds against Sterling ) and this style is best suited for five-round fights. 15 minutes isn’t a lot of time, and so if Yan no finds himself in a three-round PPV co-main event, it could drastically change the flow of the fight. Personally, I think I would take Jose Aldo or Cory Sandhagen to win a three-round fight with Yan, but I would confidently choose him to win a five-round fight. I guess we’ll see.

Seems the hype died down a bit with Khamzat, which I don’t understand because it was a banger. Do you see him a bit like Francis in the sense that he loses to the champ and then comes back to win because he learned from that.

ICYMI: Khamzat Chimaev does not have “Smesh” Gilbert Burns, but instead won a Fight of the Year contender which saw him overcome serious adversity.

The hype with Khamzat didn’t die down, it just hit its ceiling. Prior to the Gilbert Burns fight, Chimaev was so utterly dominant that there was no limit to what could be imagined for him. Could he crush Kamaru Usman without breaking a sweat? Sure. Could he ragdoll Israel Adesanya? Most likely. Could he knock out Jiri Prochazka and submit Glover Teixeira? Sure. Everything was possible for Khamzat. He was a blank canvas on which we could write our dreams. Then Gilbert Burns woke us all up.

Here’s the deal, Chimaev just fought one of the top five welterweights in the world and won, but because we all predicted an abject demolition, some fans are disappointed. It’s natural, but it’s also kind of crazy. Chimaev is still going to hold a UFC title one day, maybe two. And when the “bad” result of your career is that you’ve only won one UFC belt, well, that’s pretty darn special.

Numbers aside… is Belal really in the top 5 welterweight?? He’s awesome and hilarious but I don’t see him at all. Curious to know where it is in your ranking?

Well, he definitely isn’t, because he’s No. 6 in both the UFC rankings and the MMA Fighting world rankings (the only ranking that really matters). Personally, I have Belal at 8th in my ranking and that seems fair to me. He’s an elite welterweight, one of the best in the world, but not quite in that top echelon of the division. If he beats Luque on Saturday we might have to reconsider, but I doubt that will happen.

I like Belal and I think he’s a great fighter. But he’s not a great athlete, he’s not particularly dynamic, and those are serious handcuffs for a fighter trying to win a legitimate title. Belal has no cheat code to fall back on and just, “oops, I win” as Vicente Luque does. It should be nearly perfect every time. The fact that he’s been able to do this so far is a testament to his talent and work ethic, but he’s now coming up against the limits of his abilities. And it’s not like Belal has room to grow. He is almost 34 years old. The cake is baked with it. It’s who he is. And there’s nothing wrong with being the funniest Neil Magny. A great, great majority of people never get to that level of sport. To be one of the top 10 people on the planet is an absolutely incredible achievement by any rational metric, and that’s where Belal is. Unfortunately, he’s set to fight a guy who is a top-five and has already knocked him out with relative ease. It is a difficult sport.

Thanks for reading and thanks to everyone who tweeted! Do you have any burning questions about things at least somewhat related to combat sports? Then you’re in luck, because you can send me your Hot Tweets, @JedKMeshew, and I will answer them! It doesn’t matter if they are topical or nonsense. Send them to me and I’ll respond to the ones I like the most. Let’s have fun.