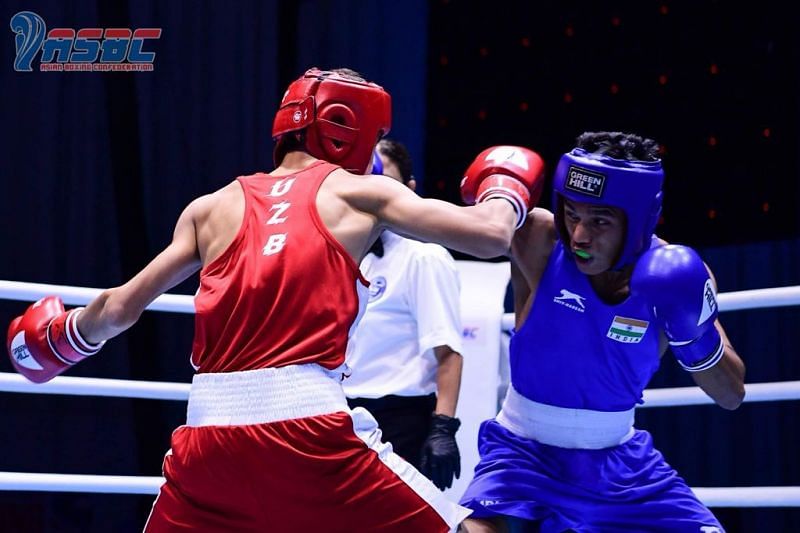 Indian boxers put on a brilliant show at the Asian Youth Boxing Championships by winning six gold medals on the final day to end a stellar campaign. Young Indian boxers Bishwamitra Chongtham and Vishal made their way to gold medals at the event.

To add to the jubilation, four Indian boxers won gold medals on the final day to end a memorable campaign for India at the 2021 ASBC Asian Youth Boxing Championships in Dubai.

Good training and continued support paid off as our young male boxers won historic twin medals for the 1st time and the 🥇 came home after 7 years at the Asian Youth Championships. Previous 🥇 the medal has arrived, back in 2014 👏🏻#PunchMeinHaiDum pic.twitter.com/Bv09VNwVN5

The event was featured by Indian pugilists as the country had 15 participants vying for the final on Monday. Other Indian boxers in action in the young men category Vishvanath Suresh, Vanshaj and Jaydeep Rawat, settled for silver medals.

Bishwamitra entered the competition as one of the favorites. The youngster beat Uzbekistan’s Kuziboev Ahmadjon 4-1 in the men’s 51kg final to give India their first gold in the youth event at the current championships.

The Indian boxer showed efficient defensive technique and graceful footwork against the Uzbek boxer in a match that saw the two boxers exchange big blows. However, Bishwamitra kept his cool throughout the game and hit a few accurate shots to clinch the gold.

Meanwhile, Vishal, in the 80kg final, produced a dominant performance against Akmatov Sanzhar of Kyrgyzstan. The Indian looked at his top dominant and made things very difficult for Sanzhar. Vishal continued to deliver heavy blows to his opponent and took the win in a one-sided fight after a unanimous decision from the referees.

Pugilists fight their way to glory at the event

India’s Neha beat her Kazakh opponent 3-2 in the final to win gold in the 54 kg event. Preeti Dahiya added to the glory by also winning gold by beating his opponent 3-2 in a decision split by the referees.

Medals continued to flow for India as Sneha Kumari won her final in the 66kg category. Khushi went on to clinch India’s sixth gold medal as she headed for a comfortable victory in the 75kg class.

India had a stunning campaign at the last Asian Championships for young men and women, which were held in Ulaanbaatar, Mongolia, in 2019. The pugilists won 12 medals, including five gold.

The event’s gold medalists will receive $ 6,000 while $ 3,000 and $ 1,500 will be awarded to the silver and bronze medalists respectively. India impressed in the competition which featured strong boxing nations like Kazakhstan, Uzbekistan and Kyrgyzstan. It was also the first time that the two age groups – juniors and youth – had been played together.