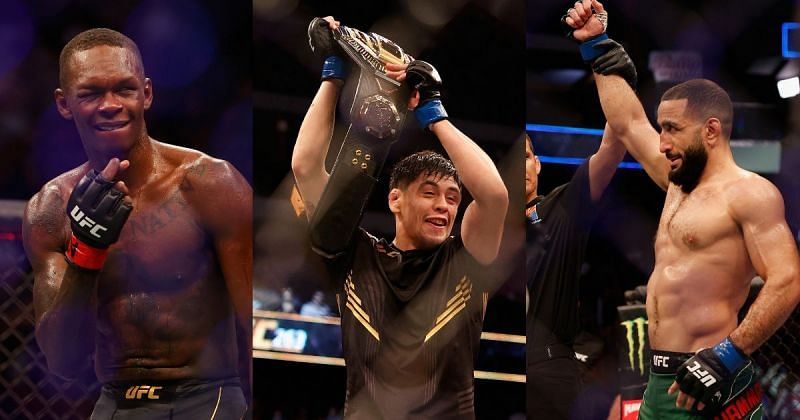 A recent update to the UFC rankings, in the aftermath of UFC 263 in Arizona, has made some significant changes. The event at the Gila River Arena saw some impressive performances and some lackluster. Here’s everything you need to watch out for in the new leaderboard:

Changes in the UFC pound-for-pound ranking:

Israel Adesanya’s dominating victory in his rematch against Marvin Vettori helped him earn a spot on the UFC’s pound-for-pound list. “The Last Stylebender” passed featherweight champion Alexander Volkanovski to become the No.3 athlete for the pound, behind welterweight champion Kamaru Usman and former light heavyweight champion Jon Jones.

Adesanya defended his belt with a unanimous 50-45 victory over “The Italian Dream”. The middleweight champion displayed incredible ground defense and used leg kicks to dominate the five-round championship fight.

New UFC flyweight champion Brandon Moreno was awarded twelfth place on the pound for pound list after beating Deiveson Figueiredo in the main co-event of UFC 263.

The first Mexico-born UFC champion delivered a spending performance against Figueiredo, submitting the Brazilian in the third round.

Lauren Murphy (@LaurenMurphyMMA) extended their winning streak to 5ï¸âƒ£ in a row at # UFC263, it is the longest streak in the division behind champion Valentina Shevchenko.

Changes to the UFC divisional standings:

Marvin Vettori slips to No.4 in middleweight division

“The Italian dream” Marvin Vettori slipped to fourth in the middleweight division after his unanimous decision loss to Israel Adesanya. Jared Cannonier took his place to become the No.3 middleweight contender.

Belal Muhammad climbed three places after beating veteran Demian Maia. Belal “Remember the Name” Muhammad is now ranked 9th in the welterweight division. Demian Maia, on the other hand, slipped to eleventh place in the standings.

Paul Craig climbs two places in the light heavyweight division; Misha Cirkunov and Jim Crute each go down one place

Paul Craig was successful in his business on Saturday night as his vicious arm dislocated opponent Jamahal Hill’s elbow. The ref was unable to spot Hill’s tap-out or broken elbow, leading Paul Craig to win via TKO. He is now ranked No. 12 in the light heavyweight division. Meanwhile, Jamahal Hill has not suffered a drop in its ranking, remaining in fifteenth.

Misha Cirkunov and Jim Crute both lost places in the light heavyweight standings. Cirkunov is now in thirteenth place, while Crute is only one place below him in fourteenth.

UFC lightweight Brad Riddell placed in the top fifteen in the division after his unanimous decision victory over Drew Dober at UFC 263. Both received the Fight of the Night bonus after a brawl absolute. Brad Riddell is now ranked No. 13 in the lightweight division.

Other ranking changes after UFC 263:

Movsar Evloev earned a place in the featherweight division at No.13, swapping places with Shane Burgos.