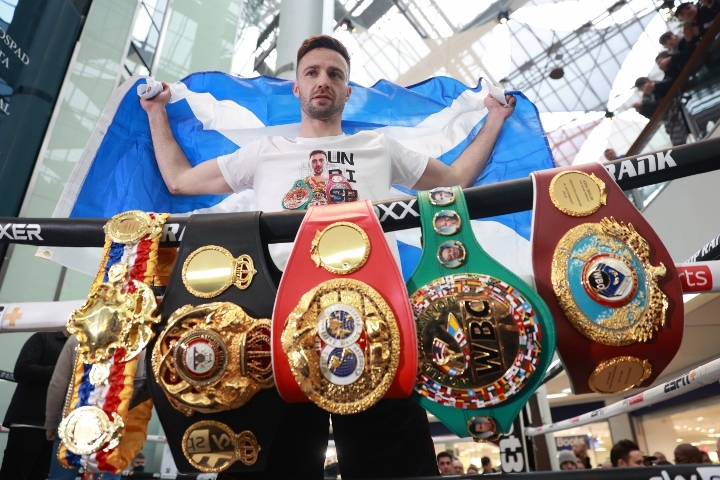 Josh Taylor: I gave up three titles for Catterall Rematch to happen

Earlier this year, Taylor won a controversial twelve-round decision over Catterall – when they faced off for the undisputed junior welterweight championship.

A deal is almost done for the two boxers to collide in February next year.

“It’s in the hands of the lawyers at the moment. We’re looking at finalizing and securing contracts and dates so it looks like that will be the next fight,” Taylor told Sky Sports.

“It’s been a long time coming, I wish this one was nice and soon, but it’s with the lawyers so I’m just waiting for everything to come back to me. I did everything I could from my side, so we’re just waiting on the other side, really.”

When they met, Taylor had all the major belts at 140 pounds.

As mandatory obligations piled up, Taylor was forced to vacate the IBF, WBA and WBC world titles – in order to stay on track with a fight against Catterall.

“At the end of the day I’m the champion, I still had all the belts. I dropped three for this fight to happen. I think it’ll most likely be back in Scotland, we’re not not really sure of the timeline, but it looks like it will be next,” Taylor said.

“I’m delighted with this new chapter in my career. It’s a good start, new and refreshing. I was able to meet him a few months ago, talk to him and offer him ideas, and I liked the way including his works mind, mindset and ideas,” Taylor said.

“I went down and had the trial week with him and then he came to Scotland a few weeks later and we hit it off, gelled really well. He stayed with me over the weekend. end and we really got to know each other and talk in depth about what we want to do, move forward.”

Japanese stars Aoki, Hirata, Okami and Wakamatsu added to ONE 163 on November 19

Christy Martin Promotions returns for another night of all-action professional and amateur boxing at Mayhem in Myrtle 6 on Saturday. November 5