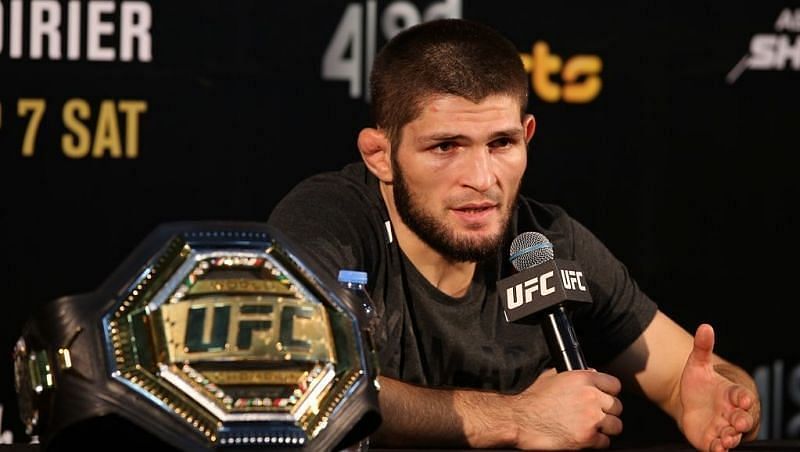 Former UFC lightweight champion Khabib Nurmagomedov is keeping a close eye on Russian fighters currently competing in MMA. In a recent interview with RT Sport, Nurmagomedov named the best Russian male fighters in the UFC in each weight class.

Khabib Nurmagomedov backs UFC flyweight Askar Askarov to become champion all the way. According to ‘The Eagle’, Askarov has what it takes to beat the defending champion inside the octagon.

Nurmagomedov hails former bantamweight champion Petr Yan as the top fighter in the 135-pound division. At 145 pounds, he supports much-loved hope Zabit Magomedsharipov to become champion in the future. In the heavily stacked lightweight division, Khabib hopes to see his longtime friend and teammate Islam Makhachev fight for the title soon.

At 170 pounds, Nurmagomedov has his money on his undefeated fighter compatriot Khamzat Chimaev to ultimately capture the welterweight strap. He hasn’t named any Russian fighter in the UFC middleweight division who caught his eye. Instead, “The Eagle” chose Magomed Ismailov of Russian Absolute Championship Akhmat as the most promising 185-pound fighter.

Nurmagomedov has claimed Magomed Ankalaev could become UFC light heavyweight champion. Speaking of the heavyweight division, “The Eagle” was unable to name a Russian fighter ready for glory in the near future:

“In the bantamweight, it’s Petr Yan. At featherweight, it’s Zabit Magomedsharipov. It is [Makhachev] already one of the contenders for the UFC title [at lightweight]. I would also like to mention Ankalaev. He has a good chance of becoming a champion. I almost forgot about Askarov. Brandon Moreno is the current UFC champion and Askarov has drawn with him. It is very close to the title. I think Khamzat has a good chance [at welterweight]. He is doing very well. In heavy weight, I do not see anyone. Anyone, ”Khabib Nurmagomedov said.

Check out Nurmagomedov’s interaction with RT Sport below:

Khabib Nurmagomedov’s legacy as one of the greatest mixed martial artists on the planet is set in stone. With an unbeaten record of 29-0, Nurmagomedov was ranked number one for pound-for-pound male fighters in the UFC after his fight with Justin Gaethje at UFC 254.

Nurmagomedov has not only dominated each of his opponents inside the Octagon, but has also won almost every round in every fight he’s been in. While there is no end to the pound-for-pound GOAT debate, it’s safe to say that Khabib Nurmagomedov is by far the greatest lightweight in UFC history.

Big fan of Khabib Nurmagomedov? Follow our FB page for your daily dose of MMA takedowns!

WWE’s Most Disappointing Signing of the 2010s