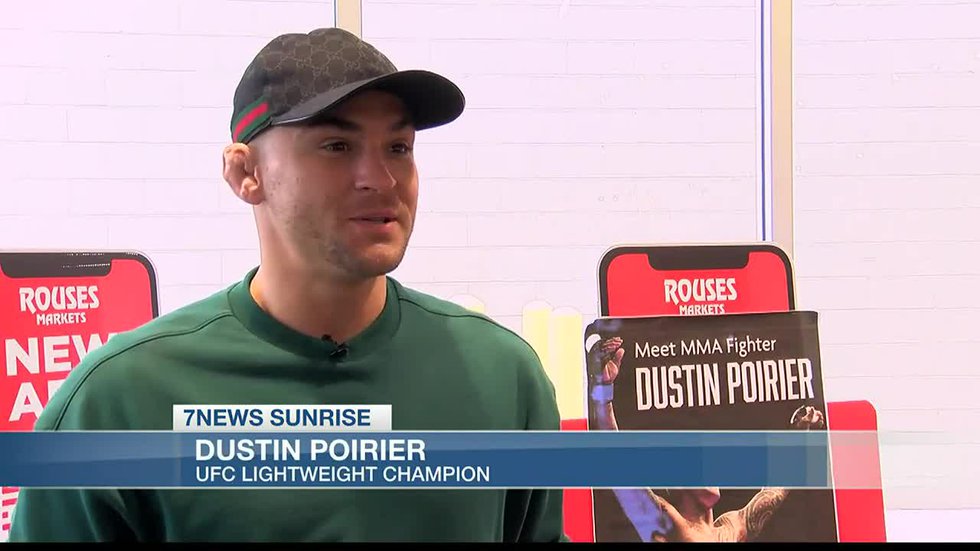 Lake Charles, LA (KPLC) – Rouses in Lake Charles had lines running through the building this weekend… But it wasn’t for groceries. Turns out it was a fan encounter with former UFC lightweight champion Dustin (poor-yay) Pear tree.

Rouses Market on Nelson Road was packed with people on Saturday, as MMA fans across the parish waited patiently for their chance to meet former UFC lightweight champion… Dustin Poirier.

“That’s super exciting… Uh… We all look up to Dustin Poirier. He’s an idol and uh… (Lauren Carpenter: “Inspiration”) A positive uh… Influence on these up-and-coming fighters uh… Around that area,” Justin Carpenter said. For many fans… the MMA fighter is a great role model. Like Dustin and his wife Jolie Poirier are the founders of the Good Fight Foundation. Which they use to give back to their community in Lafayette, Louisiana…and it inspired this couple to do something similar.

“We just show up and let him know what we’re trying to do with these uh… young boxers and uh… We’re trying to turn our gym into mixed martial arts as well as wrestling,” Carpenter said.

Curious to know why Dustin chose to meet fans here in Lake Charles, we went to find out why…

“Man Rouses is a large supermarket. Uh… Belonging to Louisiana… I’ve been shopping there all my life. Being in the hot sauce business, and them (Redheads) buying loads of hot sauce, and Louisiana supporting its own people… It’s just a good fit. Louisiana is very supportive of local things, especially sports. So I felt that love from the community back when my name wasn’t known to, you know, the masses. So I enjoy Louisiana,” Dustin Poirier said.

He said he also had fond memories of Lake Charles before his rise to fame. “Yeah! When I was an amateur fighter, I fought here, right by the Lake Charles bridge,” Poirier said.

Dustin’s UFC career has come with many highlights. One of them being his infamous 3rd fight with Conor McGregor last summer… which left Conor with a broken leg.

With fans desperately wanting a 4th fight…I asked if he thought it was possible. “I don’t know if we’re ever going to do a fourth fight. I think I’m more likely to fight Nate Diaz this summer, but we’ll see, money talks. said Poirier.