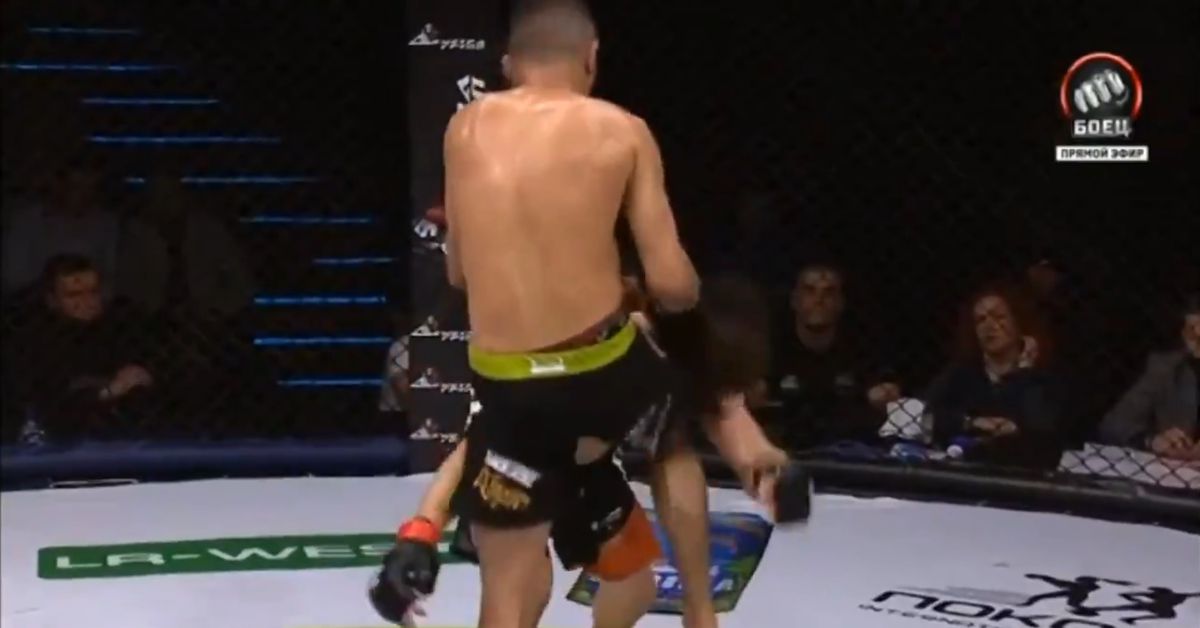 
Welcome to the latest edition of Missed Fists where we shine a light on fights around the world that may have been overlooked in these hectic times where it seems like there’s an MMA show every other day.

We’re aware that this meme is probably way past its expiration date, but until it’s really beaten in the mud and left out with classics like All your bases belong to us and Rickrolling, you know we had to do at least one Call an ambulance … but not for me! edition of Missed Fists.

(Lots of credit, as always @Barrelelapierna, who compiled the majority of these finishes in their weekly recap of the best finishes, which can be found here and here, and the combat fanatics who regularly download these clips. Give everyone here a follow on Twitter!)

There was serious violence and madness in Russia and Germany over the past weekend.

The aptly named Bruno Roverso turned the tables (get it?) Dramatically against Aleksandr Grozin, surviving a punitive wrestling attack in the first three rounds to mark our first notable return of this feature.

It really seemed like Roverso had no answers for Grozin’s fight, but he avoided his timing and then BOOM landed a perfect knee as Grozin leveled up, which practically ended the fight.

Roverso won a featherweight title and improved to 17-5, while Grozin fell to 15-4-1. Neither fighter is over 26, so while Roverso is likely to be a big show soon, don’t think Grozin is too far away from receiving his own summons.

In the following fight, we had another wild comeback, because Evgeny Erokhin (22-7, 1 NC) had to wake up the beast to pick up a knockout from Vladimir Seliverstov (12-3).

Evgeny Erokhin is a tough guy. Dropped twice in a streak in R1 only against KO Vladimir Seliverstov in the second round. Unifies light-heavy MFP / OFC titles. # OpenFC4 pic.twitter.com/O8C1Ynh6rm

The first lap was pretty measured until the last minute when Seliverstov caught up with Erokhin with a straight right. A stumbling Erokhin then ate another, sending it bouncing off the other side of the cage. He was never in major danger, but Seliverstov was clearly in the lead.

This attack must have shaken something cowardly because Erokhin immediately went mad to start the second and he just overwhelmed Seliverstov. A great victory for Erokhin, who unified the Open FC and MFP light heavyweight titles.

Before we get to our next comeback, let’s take a moment to appreciate this 17-second guillotine starter from Valodya Ayvazyan (9-2).

It probably took us longer to appreciate it than it did for Ayvazyan to actually do it.

At National Fighting Championship 3 (available on YouTube with a paid subscription) in Krefeld, Germany we have our weirdest comeback of the week as Marc Doussis outlawed Kevin Holland by Georg Bilogrevic and then won the fight.

I’m not a doctor, but this guy is knocked out. I mean, had the referee stepped in there, it sure would’ve been early, but I would also have said, “I see what you saw there.”

Fortunately, he didn’t, and he outlasted Bilogrevic to stay perfect at 7-0.

On another submission, we have Robert Oganesyan showing off the ideal setup for an armband: throw an upkick straight into your opponent’s porridge, then grab that limb as it wobbles on the edge of consciousness.

By the way, thanks to Leah McCourt of Bellator, who used a similar technique to set up a triangular choke on the Bellator 259.

I’m just saying the next time you’re in jiu-jitsu class, practice kicking whoever you’re rolling with in the face before you jump in the sub (but seriously, don’t. it).

We had some great returns here, but there was no turning back for Mohammad Makraou after he planted the face of that knee of Eduard Evdokimov.

And we had another gorgeous knee kick thanks to Khurshed Kakhorov, even if it really was just the icing on a brutal sundae. And by sundae, I mean an endless series of strikes. And the knee is the cherry. You know what, watch the clip.

There was also a horrible leg cut after a verified kick in the main event, in case you missed it, but the less talked about the better.

Now on to some quick shots.

The NFC was busy last weekend as it also hosted the pre-season 1 of the NFC series on Saturday in Bonn, Germany, an event meant to feature less experienced fighters. It was highlighted by this elegant spin kick finish from Selim Topuz.

No follow-up needed and Topuz knew it.

We’re not done with the knees yet either, as Adam Laguna wrote this beautiful show jumping effort at the Babilon MMA 22 in Warsaw, Poland.

Then, big thanks to Cagri Ucar for posting his own Instagram highlight. You know we love it when fighters promote their products and Ucar has every reason to be proud of this first round arrival.

He used his whole arm length there. I call it a knockout reaching out and touching someone. Sometimes that’s all it takes to let them know you care.

Fantastic killer instinct shown here by Karen Manukyan. Poor Kelvin Ogonovore, his body didn’t know when to fall and he ended up taking a lot of unnecessary punishment even though it was clear the lights were out upstairs.

That’s it for now, have a great Memorial Day weekend all over the United States. Remember to celebrate responsibly.

What was the most memorable Missed Fists moment this week?

If you know of a recent fight or event that you think has been overlooked, or a promotion that might grab your attention, please let us know on Twitter – @JedKMeshew and @AlexanderKLee – using the hashtag #MissedFists.