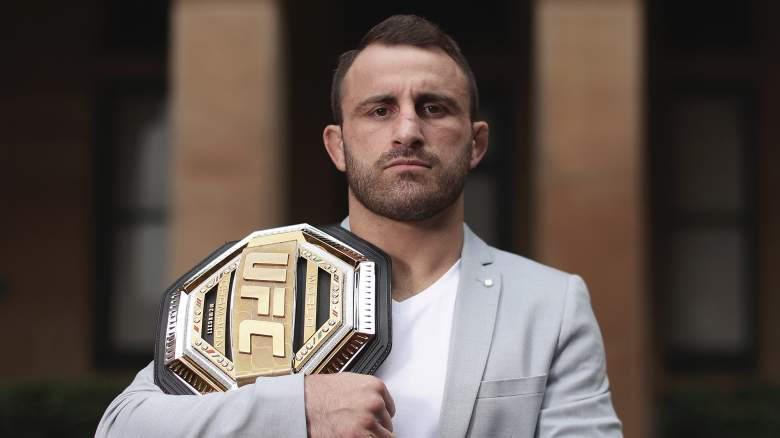 Some people are born to fight. At least that’s what it looks like every time someone like UFC featherweight champion Alex Volkanovski bursts onto the scene. Volkanovski is already one of the most dominant champions in the world, but he could also be on the verge of doing even bigger and better things in the sport.

Volkanovksi, 32, of Australia, defends his 145-pound title against dangerous contender Brian “T-City” Ortega, 30, of the United States, during the main event of UFC 266 on September 25.

Volkanovski enters the contest ranked only behind Jon Jones, Kamaru Usman and Israel Adesanya on the official UFC pound-for-pound list. Plus, there’s a strong argument to be made on his behalf that the UFC panel puts him too low on the list.

After all, Jones hasn’t competed since February 2020, and Adesanya recently lost to UFC light heavyweight champion Jan Blachowicz at UFC 259 in March.

Meanwhile, Volkanovski is undefeated in the UFC. He’s probably underrated too.

A win over Ortega at UFC 266 this weekend would make 10 straight wins for the UFC champion, so a dominant performance could help lift Volkanovski closer to where he belongs in the hearts and minds of the MMA community.

Volkanovksi is one of the best fighters in the sport, and that’s something that seems to have come naturally to him.

Volkanovski remembers day one and day two at MMA Gym

Today he is known as “The Great” UFC featherweight champion, but around the time he first walked into an MMA gym with a plan to stay in shape for his favorite sport (rugby), Volkanovski ended up proving to himself and his teammates that he was a born fighter.

Volkanovski told the UFC he knows he could be different from his peers after just his second trip to the gym.

â€œI remember walking in, it was the first time I entered my trainer’s gym. And I was going to do it more for the preseason. I remember there was a guy at my school, he was a little older, he looks at me and says’ What are you doing here? You are going to get screwed. It was before I even walked through the door. I kind of brushed it off, I could have turned around and never did an MMA fight or coach MMA at all, but I really didn’t care and just walked in, â€Volkanovsky said by UFC.

The story ends as one would expect knowing all these years later that Volkanovski became UFC champion.

â€œThe next day that same guy was there, and I remember we had some grappling. And it was the first grappling hook I had ever done, and it had been doing it for a little while, maybe even a blue belt. And I just remember absolutely crushing him, I was on top of himâ€¦ â€Volkanovski said by UFC.

The anonymous training partner never returned to the gym, but Volkanovski became a champion.

Alexander Volkanovski is possibly the most underrated and underrated champion we have seen in a long time. He is undefeated at the featherweight and has all the potential to become the featherweight goat. Here is a small montage of the highlights of Volk’s career and his accomplishments. pic.twitter.com/f6PX45V0WT

Volkanovski’s only loss as a professional fighter dates back to 2013 on his fourth professional outing. Plus, this fight took place two weight classes above the one he leads today.

So no one has ever beaten Volkanovski in the featherweight division.

Either way, Volkanovsky just didn’t seem to have the fans behind him in the same way they flock to other big stars in the UFC.

Among his pound-for-pound brothers Jones, Adesanya and Usman, Volkanovski appears to be the slowest needle-mover of the bunch.

This happens even after he was featured this year as a trainer in the latest edition of the reality TV series “The Ultimate Fighter”.

But UFC 266 could make a big difference.

Volkanovski favored in betting market to defeat Ortega at UFC 266

Volkanovski is the -155 favorite in the betting market according to Caesars Sportsbook Thursday odds. Ortega is a +135 underdog.

As dominant as Volkanovski was in the UFC in the featherweight division, it looks like some punters still won’t be backing him in the betting market just yet.

A look at the stats ahead of UFC 266 revealed that Volkanovsky dominated the numbers between the two fighters in almost every category.

Even looking at how every man has performed recently against a common opponent, former champion Max Holloway, the data has revealed a seemingly large talent gap between Volkanovski and Ortega.

To put it bluntly, Volkanovski defeated Holloway twice, and Ortega was destroyed and stopped by the same fighter.

Either way, Volkanovski is entering what will be his second title defense in the UFC, just a slight betting favorite in the fight.

ALL the latest UFC news straight to your inbox! Subscribe to Big on the UFC newsletter here!

You can see all of the major card actions planned for UFC 266 on September 25 in the list below.

The other fights are listed below.

READ NEXT: 5 reasons why no one can beat Valentina Shevchenko