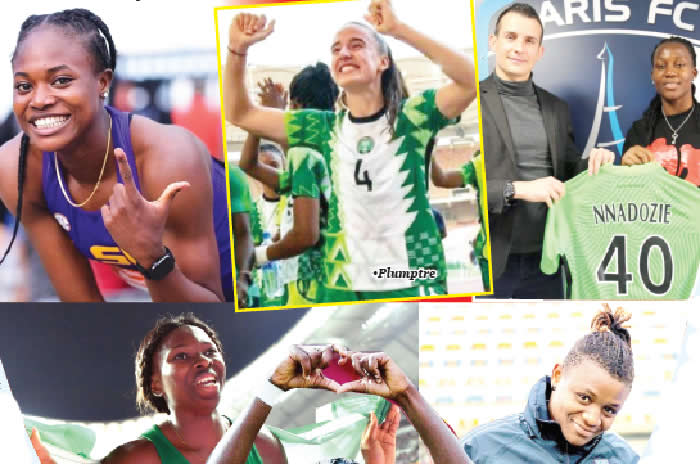 “What a man can do, a woman can do better”, goes a popular saying. In different spheres of life, women have in fact proven that they often do their jobs better than men, including sports. This year alone, several Nigerian sportswomen – domestic and foreign – have achieved almost unbelievable performances in their various sports, which have attracted global and local recognition. From the Nigeria Women’s Professional League to major European leagues, athletics and even boxing, the country’s sportswomen have distinguished themselves and stood like amazons among their peers. Below we take a look at some of the female athletes who have been phenomenal in 2022…

We start our list with an outstanding sprinter, Ofili, a teenager. The sprinter had an incredible 2019, when she was named the best female athlete at the 2019 African U-18 and U-20 Championships after winning the 200m and 400m of the event, setting personal bests in both races.

In the same year, the 19-year-old finished second to Patience George at the Nigerian Championships and ran under 52 seconds for the first time in the 400m.

However, 2022 has been an amazing year for the youngster, breaking and setting new records. The first was on April 15, when Ofili broke Blessing Okagbare’s 200m national record at the 2022 Tom Jones Memorial Classic in Florida, when she ran 21.96 seconds to also become the first college athlete to go under. the 22 seconds.

In time, she also became the first Nigerian woman to break 22 seconds in the women’s 200m, which set a new national record. His time is also the fastest in the world this year, the fastest ever in the NCAA and a new school record.

The American Athletic and Cross Country Coaches Association named her National Athlete of the Week three days after achieving that goal. Two weeks later, at LSU’s invite to Bernie Moore Track Stadium, she ran 10.93 seconds in the women’s 100m to win the event and move to No. 4 as the fastest 100m runner. of Nigeria behind Okagbare (10.79 seconds) and also at No.5 in Africa

Despite being injured for much of the season (three months), Barcelona Femini striker Oshoala finished top scorer in La Liga Iberdrola with 20 goals in 19 appearances to become the first African to win the Pichichi award in Spain.

Barcelona have won all 30 league games in their domestic division as well, with Oshoala’s Golden Boot goals a big part of that feat.

Although Barcelona fell to French giants Lyon in the Champions League final, Oshoala scored in the 4-0 win over Real Madrid to advance to the Spanish Cup final. In her 100th appearance for Barcelona in February, she scored a brace to set up 79 goals for the club, and she now has 82 goals for La Liga champions Iberdrola.

Newly selected Nigerian defender Plumptre has played a pivotal role for Leicester City in the FA WSL, helping them avoid relegation. Scoring in a 3-0 win over West Ham, the Leicester City captain was also shortlisted for the FA WSL Player of the Month for her performance in February.

For Nigeria, the former England youth international has been solid in defence, making his debut in the 3-0 win over Ivory Coast in AWCON 2022 qualifying and helping the team keep their clean sheets on two sleeves.

On May 10, she was named the Leicester City Women 2021/22 PFA Community Champion. The newly-promoted team thanks her in large part for escaping relegation.

In March, Tokyo 2020 Olympic Games long jump bronze medalist Brume took Nigeria back to the podium at the World Indoor Championships for the first time since Olusoji Fasuba won gold in the 60m in Valencia in 2008.

She made a huge personal best of the season 6.85m in the third round in Belgrade, Serbia, to win the silver medal, behind pre-championship and home favorite Ivana Vuleta, who jumped 7 .06 m.

Through this feat, Brume not only became the third Nigerian to medal at the World Indoor Athletics Championships. With Brume’s silver medal, Nigeria has now won 12 medals in championship history with two golds, seven silvers and three bronzes.

The 25-year-old also dominated the long jump on May 12 at the Puerto Rico International Athletics Classic at Francisco Montaner Stadium in Ponce with 6.90m (3.5m/s).

Before 2022, Brume was exceptional. She is a three-time senior African long jump champion and holds a personal best of 7.17m. She is also the African junior record holder for the event and five-time African junior champion in athletics.

Super Falcons goalkeeper Nnadozie has been phenomenal for the country and club Paris FC, where she was awarded the Bruno Martini award for the women’s top-flight league goalkeeper revelation of the season.

Her performances in goal helped her side qualify for next season’s UEFA Women’s Champions League after finishing third in the table, as she kept 13 clean sheets in 19 league appearances for the French.

For Nigeria, Nnadozie had a significant impact keeping clean sheets in both legs of their second round qualifier against Ivory Coast and saving a penalty in the second leg.

“When the referee called the penalty, I thought it was time for me to save the team. And I did exactly what I told myself,” said Nnadozie ESPN.

The 21-year-old will be a vital asset to the Falcons at AWCON in July.

UNAL Tigres forward Kanu is attracting a lot of attention with her goalscoring ability in Mexico’s Liga MX.

Kanu became the first African woman to play in Mexico, having joined Tigres from Swedish side Linkopings, where she was the goalscoring queen.

The 2019 African Footballer of the Year nominee has taken her goalscorers from Sweden to Mexico and is having a fantastic debut season, scoring her second hat-trick in a 4-1 win over Santos Laguna in April.

Since her debut against Nexaca on January 10, she has scored 17 goals in 24 games for third-placed Tigres.

In a world where most women would shy away from boxing, which is widely seen as a men’s sport, this woman got into it first and hasn’t looked back.

Popularly known as ‘Iron Abbey’, she competed against UK’s Laura Pain for the belt. With four wins and three knockouts, she won the title bout on a unanimous decision basis, becoming the first Nigerian and African woman to achieve the feat.

She is a member of the Lagos State Police Force, a boxing judge and a professional boxer who has distinguished herself in the field of boxing by winning several awards and recommendations as a boxing referee at the amateur level.

Last but not least on the list we have Monday for her performances in the recently concluded Nigeria Women’s Football League Super Six, which saw her not only win three individual awards but her nine goals propelled Bayelsa Queens to the title in Benin. City, the capital of Edo State.

She set two records during the competition – the event’s first hat-trick and the most goals ever scored in the NWFL Super Six by a single player in a season.

Monday picked up top scorer, most valuable player and woman of the match awards in the competition’s final day clash, earning her a deserved call-up to the Super Falcons ahead of the Women’s AFCON. next month in Morocco.

All rights reserved. This material and any other digital content on this website may not be reproduced, published, broadcast, rewritten or redistributed in whole or in part without the prior express written permission of PUNCH.