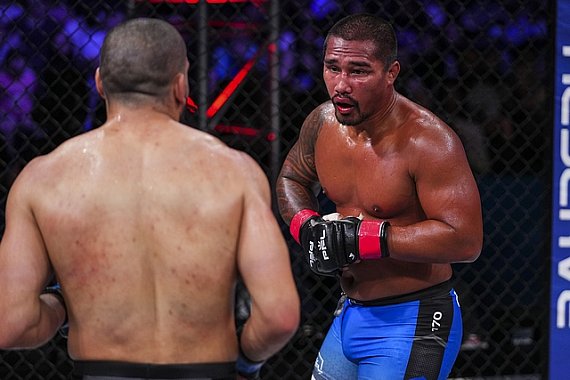 Ray Cooper III didn’t have a long-winded explanation behind the lack of weight that occurred prior to his loss to Carlos Leal Miranda at PFL 3.

The two-time PFL champion tipped the scales 5.4 pounds over the contracted welterweight limit and then looked slow in a unanimous decision loss to Miranda. Now the Hawaiian needs a big performance to keep his playoff hopes alive.

“I just didn’t get in shape. That’s about it,” Cooper told a PFL media day. “I started my camp late. Things happen and I just started late.

Cooper III will get the chance to right the ship at PFL 6 against Brett Cooper, a veteran of 44 professional fights who is a former Bellator title challenger and a former Absolute Championship Akhmat title holder. “Braddah Boy” is well aware of the stakes involved.

“Brett Cooper has been around for a while. He has a lot of fights,” the Hawaiian said. “But I really didn’t watch his fights, just a few. I faced everyone, so it doesn’t matter. I just have to finish the first round and hopefully make the playoffs.

While Cooper joined the list of top Hawaiian fighters to find success in MMA with his back-to-back PFL titles, BJ Penn remains perhaps the most high-profile fighter to emerge from the island. While Cooper III is admittedly not someone big in politics, he shared his thoughts on the UFC Hall of Fame. campaign for governor from Hawaii.

PFL 6 takes place Friday at the Overtime Elite Arena in Atlanta, Georgia, and is headlined by a lightweight clash between Kayla Harrison and Kaitlin Young. The main card airs on ESPN and ESPN+ at 8 p.m. ET / 5 p.m. PT, while the prelims air on ESPN+ at 6 p.m. ET / 3 p.m. PT.