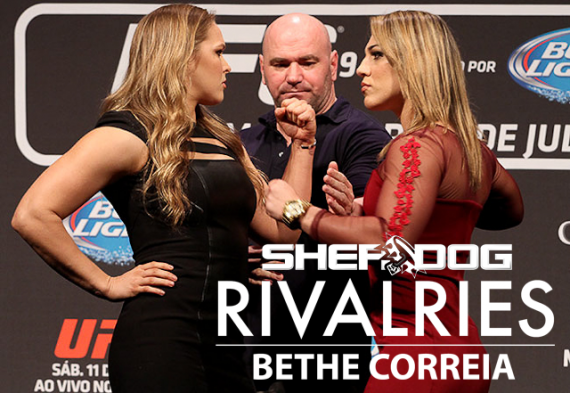 Sign up for ESPN + here, and then you can stream UFC, PFL, Dana White’s Contender Series, and “The Ultimate Fighter” live to your smart TV, computer, phone, tablet, or streaming device through the ESPN app.

Bethe Correia’s talents could not have taken her further than them.

The former Ultimate Fighting Championship women’s bantamweight title challenger will end her career in a three-round battle with Karol Rosa on the UFC Fight Night 193 undercard this Saturday at UFC Apex in Las Vegas. Correia is 5-5-1 in 11 appearances for the Octagon. The 38-year-old Brazilian last appeared in the UFC on ESPN 14, where she gave up a unanimous decision to Pannie Kianzad on July 25, 2020.

As Correia prepares to make her final walk to the cage, a look at some of the rivalries that have helped shape her career:

Multiple punch combinations and searing leg kicks led Correia to a unanimous decision on the ‘The Ultimate Fighter’ Season 18 graduate in a UFC 172 Women’s Bantamweight Preliminary on April 26 2014 at Baltimore Arena. The three cage judges sided with the undefeated Brazilian: 30-27, 29-28 and 30-27. Duke, who is part of Ronda Rousey’s infamous Four Horsewomen stable, had her moments, especially with the jab, but she failed to match the intensity and volume of her counterpart. Correia succumbed to a few takedowns but got out of harm’s way and responded to every punch with three or four of her own, while keeping the tall, lanky American off balance with repeated kicks on her leg. head. In the end, she had edged Duke in all three laps and held a 118-70 advantage overall.

The up-and-coming Brazilian contestant sent Baszler off with a swarm of powerful punches in the second round of their UFC 177 women’s bantamweight showcase on August 30, 2014 at the Sleep Train Arena in Sacramento, Calif. “The Queen of Spades” succumbed to successive shots to the head and body at 1:56 of the second round. Correia resisted the formidable ground attack from longtime Josh Barnett’s protégé and future World Wrestling Entertainment superstar for much of the first frame. In the second, she bottled Baszler on the fence and tagged her with a pair of standing elbows, forcing her into a defensive shell. Right and left hooks to the floor and body came next, as “Big” referee John McCarthy moved in to take a closer look. Soon after, he had seen enough.

Sign up for ESPN + here, and then you can stream UFC, PFL, Dana White’s Contender Series, and “The Ultimate Fighter” live to your smart TV, computer, phone, tablet, or streaming device through the ESPN app.

The leader of the Four Horsemen entered the wheelhouse of Correia and did not blink. Rousey dramatically knocked out “Pitbull” to retain the Ultimate Fighting Championship women’s bantamweight crown in the headliner of UFC 190 on August 1, 2015 at HSBC Arena in Rio de Janeiro. She only needed 34 seconds to complete her night shift. Correia didn’t stand a chance. Rousey ran her punches, pinned the Brazilian brawler along the fence, and fired with rights and lefts until she was no longer standing. A right hand connected to Campina Grande, Brazil’s temple, and sent Correia crashing face-first onto the canvas, electrifying onlookers. McCarthy then jumped up to push Rousey away from the helpless challenger.

Correia decided to laugh at her own peril and ate a shin in her face for her troubles. Holm knocked out the Brazilian “Pitbull” with a header in the third round of his UFC Fight Night 111 headliner on June 17, 2017 at Singapore Indoor Stadium in Kallang, Singapore. Correia hit his goal 69 seconds after the third round. Both women got off to a terribly slow start and were berated for their shyness by referee Marc Goddard at the start of the second round. Not much changed until the third. There, Correia dropped her hands and urged the Jackson-Wink MMA star forward. His taunts turned out to be costly, as Holm forced him and connected with a high left kick upstairs. A dazed and helpless Correia hit the bridge, where she was greeted by a sharp left hand from “The Preacher’s Daughter” before Goddard could arrive at the scene.