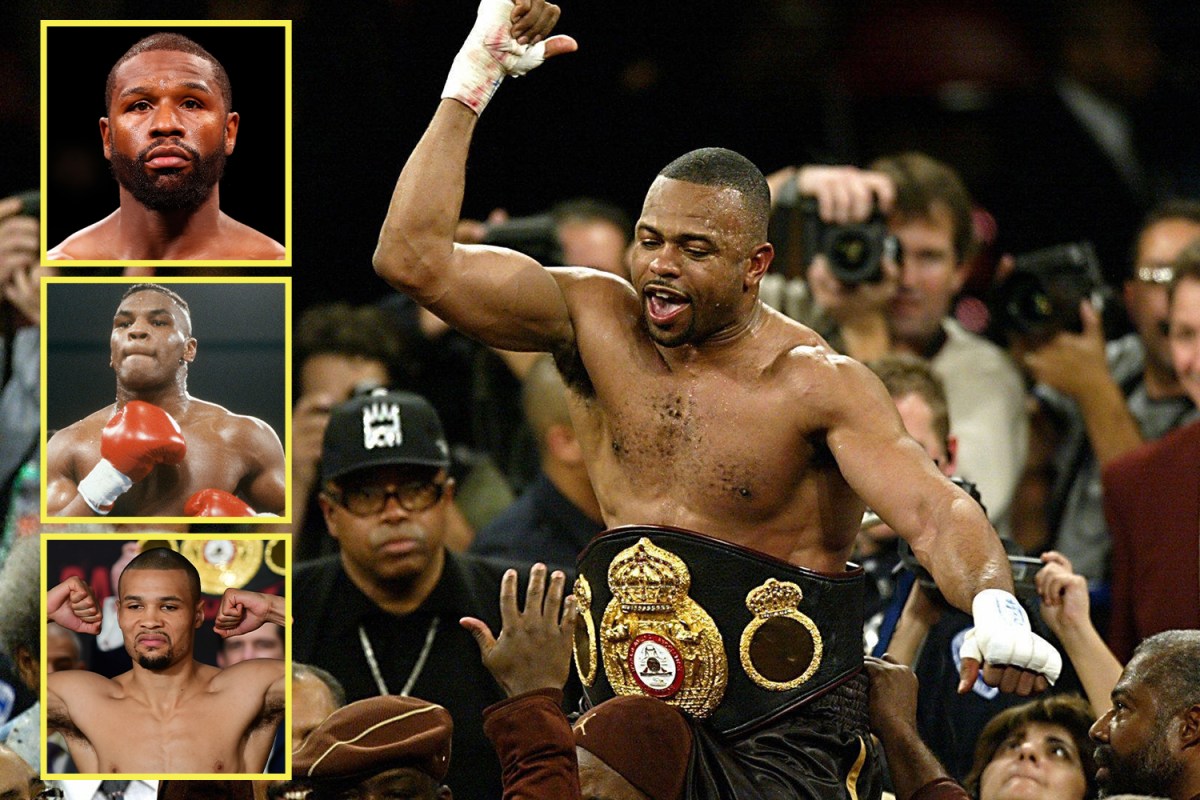 Roy Jones Jr is a four-weight champion, who once knocked a man out with his hands behind his back, fought Mike Tyson, was faster than Floyd Mayweather and is now trying to make Chris Eubank Jr a world champion.

There was a point in Roy Jones Jr’s glittering career when, had he retired at the perfect time, he might have become the greatest pound-for-pound fighter of all time – even before Muhammad Ali, Sugar Ray Robinson and his contemporary, Floyd Mayweather Jr.

Jones, the trainer of Chris Eubank Jr, who danced past Liam Williams in Cardiff on Saturday, is still hailed as the best boxer of the 1990s and the most naturally gifted athlete to step into a boxing ring. Unconventional, rarely bothering with a jab or traditional defense, he relied on his lightning reflexes, speed, balance and amazing hand-eye coordination.

He was a boxer who, like Mayweather, could make an opponent miss with feints and head movements alone. But he was also a master of offensive innovation, leading with rapid-fire treble hooks and showboating to the point that he once stopped an opponent (poor Glen Kelly) with a one-punch knockout that started with Jones having both hands behind his back.

The blow to Jones early in his career was that he was cautious with his matchmaking, perhaps a result of the daylight robbery he suffered in his 1988 Olympic final in Seoul against the home fighter Park Si-hun (widely considered the worst decision in boxing history). Burned by this, Jones was unwilling to leave the United States to seek challenges – but few could complain when he shockingly jumped to heavyweight in 2003 to fight for a world championship .

The boxer nicknamed “Superman” had won world titles at middleweight, super middleweight and light heavyweight – but looked relatively small even at 175 pounds. In a move basically equivalent to Canelo Alvarez jumping up to heavyweight today and, without any fine tuning, fighting for a major world title belt. Granted, “The Quiet Man” John Ruiz – a tough, awkward but limited spoiler – won’t be considered an all-time great heavyweight champion (Jones wasn’t about to fight, say, Lennox Lewis) . But the sheer size difference made it extremely intriguing.

After a boxing masterclass, Jones won a unanimous decision over Ruiz in Las Vegas to become the first former world middleweight champion to claim a heavyweight title in 106 years. At the time, Jones’ record was an astonishing 48-1 (38 KOs) and his only loss was a DQ loss to Montell Griffin for hitting an opponent while down (Griffin was blitzed in a turn in an immediate rematch). Griffin, incidentally, got into a fight with Mayweather and claimed there was no comparison between the pair’s speed. “I’ve never been in the ring with anyone in my life faster than Roy Jones,” Griffin told Ring magazine after his retirement. “I fought Floyd Mayweather and he’s 25 pounds lighter than Roy and no one could compare.”

Jones had won 160-pound heavyweight gold, handily beaten the greats Bernard Hopkins and James Toney, and wowed with his daring skills. Had he retired at this point, many boxing pundits and fight fans would still be cheering his GOAT status to this day.

Instead, Jones disastrously decided to drop back down to light heavyweight and whether it was yo-yos in weight or the years that caught up with him, he was never the same again. The 34-year-old escaped with a narrow win over Antonio Tarver in his very next fight and then was shocked in the rematch. His subsequent career lasted far too long and was marked by horrific knockout losses to fighters (such as Danny Green, Denis Lebedev and Enzo Maccarinelli) who wouldn’t have put a glove on Jones in his prime.

Jones’ unique style and athletic gifts meant he arguably never really mastered all the basics of boxing, so he couldn’t fall back on the rock-solid technique and smarts that Mayweather used in aging. Jones also lacked the concrete chin and stamina that Ali displayed when his own amazing reflexes slowed. By the time Jones retired late in 2018 — ignoring his fun, semi-redemptive display against Mike Tyson in 2020 — a boxer who had once looked unbeatable had suffered nine professional losses.

The dazzling brilliance of his heyday, however, helps explain why Eubank Jr – whose father was a contemporary of Jones Jr – is in love with his trainer. Even a boxer with the considerable ego of the “Next Gen” must be impressed by an all-time great tutoring. If earning the stubborn 32-year-old the respect is half the battle, then Jones is ahead of the game as a coach. But there are understandable doubts.

Obviously, great fighters don’t necessarily make great trainers. And there are questions about whether Jones Jr, who relied on his unique athleticism, can even teach the things he was able to do. In his first two fights with Jones in the corner, Eubank Jr seemed a bit stuck between two styles; trying to emulate Jones’ punch-and-don’t-get-hit genius and pressing his own physical advantages of strength and stamina. At least Eubank Jr, who has carved his own path in the boxing game, respects and listens to Jones.

Betting offer of the day

New UK customers only. Sign up using promo code BETFRED60, deposit and place first £10+ bet on Sports (cumulative Evens+) within 7 days of sign up. The first bet must be on sports. £20 free bet to use on sports, £10 free bet to use on lotto and 50 free spins (20 pence per spin) credited within 48 hours of bet settlement. Additional £20 free bets credited 5 days after settlement. Bonuses have a 7 day expiration. Payment restrictions apply. SMS verification and/or proof of identity and address may be required. Full terms and conditions apply. 18+ Begambleaware.org

He ended up staying on Jones’ farm in Pensacola, Florida during the pandemic: cooped up (if not literally) with the hens, roosters and peacocks. He had nothing to do but train and was enthusiastic when he spoke to this writer last year, saying: ‘Roy Jones is the best coach I’ve had in my career, I wish I had met him years ago… I learned so much. So purely in that sense, the pandemic has been positive for my career. Because if it wasn’t for 2020, I wouldn’t have contacted Roy.

One thing that binds the two men is having fathers who left a strong impression. Jones was trained by his father early in his career (and at various times later) but it was a troubled dynamic: Roy Sr was a brutally strict disciplinarian who allegedly hit his son on the thighs with a piece of pipe. he made a mistake during a practice. The training borders on abuse. “I was in pain all day, every day, I was so scared of my dad,” Jones told Sports Illustrated.

On the other hand, the eccentric Chris Eubank Sr must seem like a walk in the park. But both Eubank Jr and Roy Jones know what it’s like to grow up in their father’s shadow. It remains to be seen whether Jones – who apparently isn’t overseeing all of Eubank’s UK training camp in person, but arrived earlier this year for the end – can have a better influence in the corner than Eubank. Sr. But if RJJ can convey even some of the magic that made him a jaw-dropping wizard for over a decade at the pinnacle of the sport, Eubank Jr has indeed found the perfect coach as he suggests.

Black sports history from the year you were born | Sports

Israel Adesanya has ‘work to do’ to overtake Anderson Silva