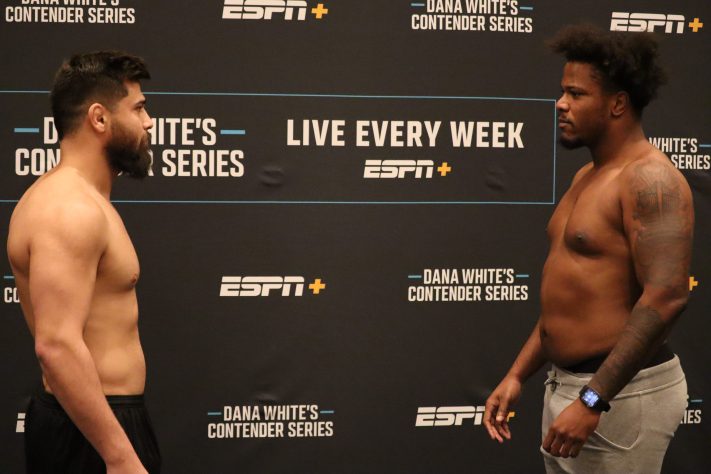 Dana White’s Contender Series began in 2017. Since then, the Contender Series has produced big upcoming stars like Dan Ige, Sean O’Malley, Geoff Neal, Maycee Barber and Edmen Shahbazyan. In short, it is a huge success.

A Contender Series fight has high stakes, where fighters must show their skills to impress the UFC president enough for a contract with the promotion giant. Holding the Contender Series with a smaller cage inside the UFC Apex venue creates a tense atmosphere, and with only close friends and family of competing fighters present as spectators. Emotions are still running high, as a limited number of contracts can be awarded each night, and many fighters can potentially have their dreams snubbed just through bad luck.

In rare cases, however, a fighter gets a second look. This series will examine them.

Jamal Pouges and his opponent, Marcos Brigagao, began the co-main event of Week 9 in 2019 by swinging on his feet before Pouges could well time a few different takedowns on his opponent, leading the fight to the ground. However, Pouges was repeatedly threatened with submissions while on the pitch. These threats often resulted in a stampede and the fighters coming back to their feet.

In the final round, Pouges again managed to put his opponent on the ground. And although Jamal became noticeably slower with his ground and weight, he was ultimately able to hold and dominate his opponent for the easy decision victory (30-27 x3).

Even though Jamal Pogues got the unanimous decision victory, at the end of the night Dana White opted out of giving him a contract. (probably because he hasn’t finished).

In place, Philip Rowe received a contract for his third-round stoppage against his opponent in the main event of the night. Steve Garcia and Mallory Martintwo more Week 9 winners in 2019, would go on to fight in the UFC after just one more fight outside of the promotion.

In Jamal’s first appearance in the Contender Series, he faced Marcos Brigagao who entered the fight with a perfect 11-0 record. Prior to the fight, Brigagao had finished his previous 11 opponents.

But Brigagao had faced rather lackluster competition early in his career, with his opponents’ combined record standing at 26-17, heading into Week 9 of the DWCS 2019.

After the Contender Series fight, Brigagao has won three of his last seven fights and is on a three-game losing streak. Clearly, Brigagao stepped up their competitive level with their record of combined opponents after taking on Jamal at 66-22.

With those facts in mind, Jamal’s dominant 30-27 UD performance has aged very well. Although it should be noted that Marcos has been knocked out three times since he faced Jamal in 2019.

Since Jamal’s appearance on DWCS in 2019, he has had a total of three fights scheduled and participated in two (with one cancellation).

Jamal first had a scheduled fight against then 3-0 Heath Jolleybefore this fight was canceled before the event.

Jamal Pogues then fought 5-0, Alex Polizzi, for the vacant LFA Light Heavyweight Championship in February 2020. However, Pouges would fall short, when he was submitted by heel hook in the fourth round. A strong overall performance for Jamal and a good experience beyond three laps.

Pouges then faced Tim Hiley, who entered the bout with a 7-2 record. Jamal was able to earn a unanimous decision win that night at LFA 91.

For Jamal’s second appearance in the Contender Series, he will battle 10-1, Paulo Renato Jr.

Paulo Renato Jr. enters the fight with a 10-1 record, the combined record of his former opponents being 34-43.

Paulo finished seven of his opponents by KO / TKO including three in the first round. And it’s obvious that although he’s yet to prove himself in professional MMA competitions, Paulo definitely has some great kickboxing skills.

Jamal will be the Contender Series 2022 Season Week 3 co-main event in what has been a wild season so far. With wrestling phenom Bo Nickal headlining, there will no doubt be more eyes on Jamal Pouges as he seeks redemption and a final declaration against Paulo Renato Jr.