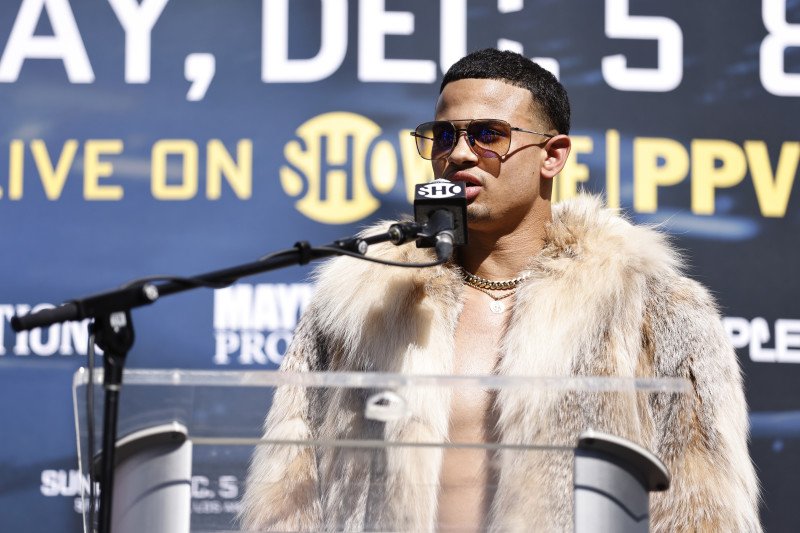 ‘There’s no way he’s going crazy again after he was just a meme’: Fans troll Rolly Romero as he shockingly calls out the undefeated champ

As spectators of the sport, fans can be absolutely brutal towards athletes, especially in boxing. With the rise of social media, fans have the right to shoot anyone. Recently, Rolly Romero came under fire from fans as he made a shocking revelation.

In a video uploaded to Twitter, Romero claimed he would move up the weight class to face none other than undefeated champion Errol Spence Jr.

Rolly Romero recently suffered a brutal knockout loss to Gervonta Davis. However, this did not dent the lightweight boxer’s ambitions. He made the shocking statement on Twitter that he would drop to 147lbs to face unified welterweight champion Errol Spence Jr.

Fans were quick to react to this video. They didn’t hold back from calling Romero. A fan brought up Romero’s loss to Davis and said “There’s no way he’s talking crazy again after he was just a meme.”

Also, a fan called Romero has “clown” and said that Spence “would put this guy in the hospital.”

Moreover, other fans also agreed as they claimed that “Spence is going to fracture this guy’s eye socket” while others claimed it would be the “jaw” that Spence will break.

Especially after his previous fight, fans are asking Romero and saying he’s not ready for Spence. A fan predicted the unified welterweight champion would knock out Romero in “4 rounds.”

It remains to be seen how serious Romero was when he challenged Spence. However, fans have had a field day since he made the revelation.

What happened the last time Romero stepped into the ring?

The last time Romero fought inside the squared circle was against Gervonta ‘Tank’ Davis on May 29, 2022. The pair delivered a scintillating performance for the fans. However, it soon came to an end.

Romero came on strong with quick combinations and pushed Davis towards the rope. However, Davis countered the barrage with a devastating left hand, which knocked Romero out. As a result, “Tank” retained his WBA lightweight championship.

What do you think of Rolly Romero calling Errol Spence Jr? Let us know in the comments below.

Beginner’s Guide to ONE Championship