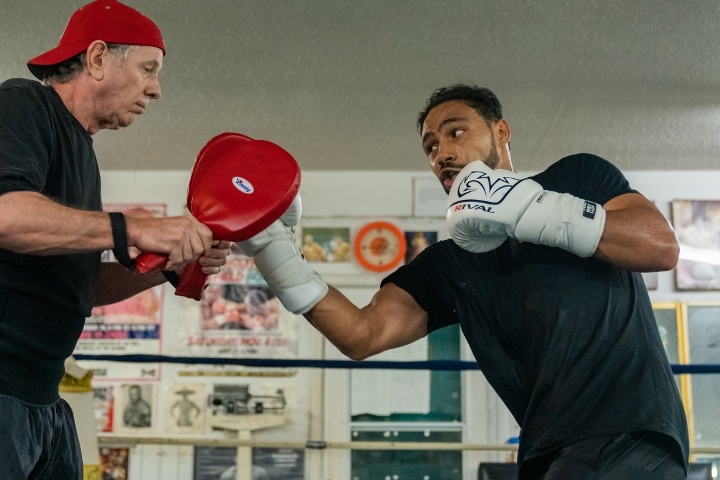 Former unified welterweight champion Keith “One Time” Thurman discussed his return to the ring and more ahead of his clash against former welterweight champion Mario “El Azteca” Barrios which will take place on Saturday, February 5 in the FOX Sports PBC Pay-Per-View Main Event from Michelob ULTRA Arena at the Mandalay Bay Resort and Casino in Las Vegas. (photo by Ryan Hafey)

Tickets for the live event, promoted by TGB Promotions, are on sale now and are available at axs.com.

The former WBA and WBC champion at 147 pounds, Thurman rose to the pinnacle of the sport with memorable victories over Shawn Porter and Danny Garcia during his long run at the top of the division. Thurman’s first loss came to legendary eight-division champion Manny Pacquiao in one of the best fights of 2019, and now the 33-year-old will be looking to start another run for the welterweight crown against Barrios.

Here’s what Thurman had to say about his training camp in Clearwater, Florida:

What’s different about this training camp?

“This training camp, we started strength training earlier. Fighters should focus on cardio at the end of their camps and lay off the weights. But we wanted to establish power early in the camp, and we were able to do that.

“Diet is always a priority. Our Pacquiao camp was very strict from the start as I had a big demand on my body to pull off 35 pounds before the fight. For this camp, we started at a 25-pound marker, and while the revs were heavy, the pulling and taxing on my body was smoother. My dedication to my diet has been tremendous and I’ve been seeing the benefits for weeks.

What delayed your return to the ring after the 2019 operation?

“I wanted to get back in the ring in 2020, but I was in trouble. I was offered a studio comeback fight with no fans.

“Coming out of the Pacquiao fight, it just didn’t excite me to come back without fans. I love my fans. I love the sport of boxing. I could have done it for the activity, and maybe, in retrospect, it would have been nice to be in the ring. But while the activity would have been good, the excitement was not appealing. I was financially stable, didn’t need the money, and wanted to put in meaningful performances and meaningful fights in the welterweight division. 2022 presented more opportunities for me and my career; At 33, I’m young, strong-willed and capable, and it’s time to come back.

Why did you say yes to Mario Barrios?

“Mario Barrios had the best record out of the small handful of fighters I was introduced to. He had an exciting performance against ‘Tank’ Davis, and it looked like it would be a big challenge for both of us. We’re two exciting fighters in the world of boxing, talented and just coming off their first career losses. It might not sound exciting at first, but if you understand what it’s like to have a competitive mindset, you know that we will both demand greatness from ourselves.

“Some fighters, after their losses, stand up and demand more – focus harder, train harder, fix some technical skills that were lacking – offense or defense, strength issues. We saw that with Canelo Alvarez after his loss to Floyd Money Mayweather Not because he was Canelo, but this loss made him stand up and show he was more than a puncher because he has more than he showed before his loss.

“I am no less than after my defeat; I will show the fans more talent to fight Mario Barrios than I did against Manny Pacquaio.”

What can fans expect in the fight?

“Fans are going to see a world class performance from two world class fighters who want to make a statement in the welterweight division. Mario wants to come in and solidify himself as a name to recognize in the 147 Division and he can take on any challengers if he gets past Keith Thurman.

“I am here to perform. With all the fights I’ve had, I think this will match all the performances I’ve given and test me. He will prove skeptics wrong who wonder, who is Keith Thurman? What does it have to offer? I will show everything I have to offer on February 5th.

“I want to get my world titles back. This is the first step to get me back in the race for the championship. I see the welterweight division as a horse race. Everyone is racing at full speed to reach the finish line – and the finish line is where you are crowned king of the division.

“We have great fighters, great champions, but there hasn’t been a king since Floyd Mayweather passed away. Keith Thurman is still in the game. I’m running behind these current champions, but I’m the type of horse who once he hits the curve, they’ll know I’m right on their tail. With the right speed, determination and momentum, I have the skills to reach the top again and reclaim my number one spot. one in the welterweight division.It’s my time to get up.Once it’s time to go.