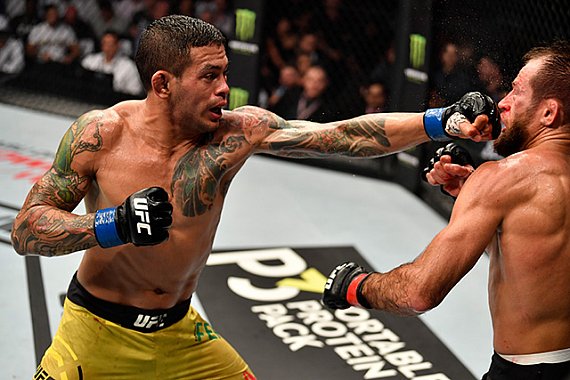 The UFC 277 card has undergone some shakeups as Diego Ferreira and Mariya Agapova have been forced to pull out of their respective fights.

Ferreira has withdrawn from a planned lightweight clash against Drakkar Klose due to an undisclosed injury. The promotion is currently looking for a replacement opponent for Klose.
BJPenn.com was the first to report Ferreira’s exit.

Ferreira went 0-3 in 2021, falling to ranked lightweights Beneil Dariush, Gregor Gillespie and Mateusz Gamrot in succession. Prior to this slip-up, the Fortis MMA product had six consecutive fights in UFC competition from 2016-2020.

Klose has won four of his last five Octagon appearances. Most recently, the 34-year-old Fight Ready rep scored a second-round TKO of Brandon Jenkins at UFC on ESPN 34.

Elsewhere on the UFC 277 bill, Joselyne Edwards will replace Agapova and lock horns with Ji Yeon Kim in a women’s flyweight bout.
MMAFighting.com reported the news, adding that Agapova pulled out with a knee injury.

Edwards snapped a two-fight skid in her last outing, earning a unanimous verdict over Ramona Pascual at UFC 275 to improve to 2-2 during her tenure with the Las Vegas-based promotion.

Kim, meanwhile, is looking to end a three-game losing streak. She has competed once a year since 2020, failing against Alexa Grasso, Molly McCann and Priscila Cachoeira.

UFC 277 takes place July 30 at American Airlines Arena in Dallas and is headlined by a bantamweight championship rematch between Julianna Pena and Amanda Nunes. In the co-main event, Brandon Moreno and Kai Kara France will battle it out for the interim flyweight title.

The death of women’s sport?