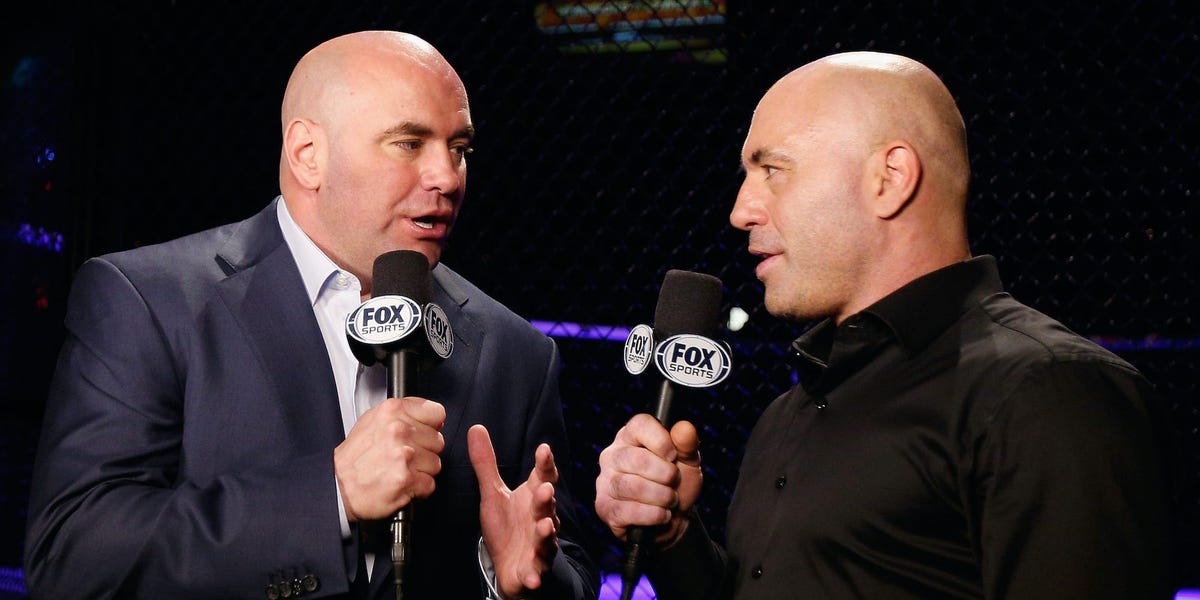 Dana White says he has COVID, is in self-isolation, and even called friend and MMA commentator Joe Rogan for advice on what to do.

The UFC boss broke the news in a 40-minute interview on The Jim Rome Show. White said he was vaccinated against the coronavirus and the only noticeable symptom was loss of smell, which he said recovered 48 hours later.

Rogan reportedly told White to take monoclonal antibodies, a drip of NAD, and ivermectin – a drug typically used to treat parasitic infections in cattle and parasitic worms in humans.

No health agency recommends that people infected with the coronavirus take ivermectin, and the The FDA has actively advised against taking the drug in connection with COVID, as there is no evidence that it helps to treat the disease in any way.

Rogan has no medical expertise.

White said he was likely infected in Maine over the Thanksgiving holiday. â€œIt’s tradition – we go there every Thanksgiving.

â€œSomeone up there had it, and we come back and we’ve all tested positive for COVID,â€ he said. “Literally the whole family and my family in Maine too. Other than that everything is great.”

White said he returned to Las Vegas on Saturday. He said his Sunday routine consisted of diving into the cold and then getting some steam, but upon taking his steam on November 28, he realized he had lost his sense of smell.

“So I open the bottle, I start to sniff the eucalyptus bottle, and I’m like yeah, I don’t have a smell. So you know what that means. I literally got out of breath, I have. picked up my phone and called Joe Rogan. “

White said he took monoclonal antibodies as soon as he could, according to what Rogan – who got infected earlier this year – advised. He also had an infusion of NAD and “took a dose of ivermectin” on Tuesday.

That same day, White says he regained his sense of taste and smell and took a vitamin infusion. “I couldn’t feel any better. I feel like a million bucks. I actually do two workouts a day for the next 10 days while I have COVID, I’m in quarantine.”

White reminded listeners of The Jim Rome Show that he was vaccinated and stressed that he was not “some crazy, anti-vax conspiracy theorist”, but that he trusted Rogan, whom he called ” a very smart guy “.

“I am not sure that following Joe Rogan’s scientific and medical advice is perhaps the most productive way for people to get their information,” said the White House communications director. Kate Bedingfield told CNN earlier this year.

It’s unclear if White will attend his own event this weekend.

The UFC hasn’t hosted an event since November 20, when Miesha Tate lost a women’s bantamweight game to Ketlen Vieira in the main event of the evening. A week later, Tate demonstrated how to remove his own stitches.

The market-leading MMA promotion returns with a live event on Saturday, a Fight Night show taking place at the UFC Apex in Las Vegas.

It’s unclear if White will be able to attend his own event. “I will continue to test every other day until I come back negative, then I will return to work as soon as possible.”

He said he hopes to attend this weekend’s event. â€œIf my test is negative, then I will absolutely be there.

“I’m going to follow the exact protocol that’s supposed to be done to make sure I’m clean and can be around people again. As soon as that is 100% clear, I’ll be back to work.”