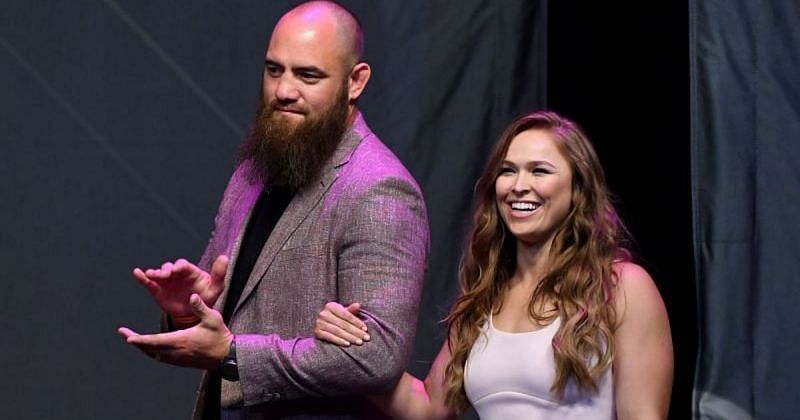 What are the ethnicities of Ronda Rousey and Travis Browne?

MMA power couple Ronda Rousey and Travis Browne are both of mixed ethnicity. The former UFC bantamweight champion is of English, Polish, Trinidadian and Venezuelan descent. Her husband Browne, meanwhile, was born to a native Hawaiian father and Euro-American mother.

Browne seems to be proud of his ethnic diversity. The UFC heavyweight’s nickname ‘Hapa’ is the Hawaiian term for someone of mixed ethnicity.

Rousey and Browne started dating in 2015, when they were both still on the UFC roster. The couple announced they got engaged on April 20, 2017 and finally got married four months later on August 28.

The two fighters posted photos from their wedding on their respective social media accounts. The former bantamweight queen wrote in her caption that it was the “happiest day of my life”. Meanwhile, Browne returned the message by posting his own heartfelt note.

Ronda Rousey, one of MMA’s biggest stars in history, is credited with creating the UFC’s women’s roster. She won a legendary streak of 12 consecutive professional wins before suffering her first loss at UFC 193. She decided to end her career after consecutive losses to Holly Holm and Amanda Nunes in 2016.

Meanwhile, Travis Browne has distinguished himself in the heavyweight division, with notable wins over Alistair Overeem and Josh Barnett. ‘Hapa’ hasn’t seen the action since his 2017 loss to Alexey Oleynik at UFC 213.

After her stint as a UFC Champion and WWE Superstar, Ronda Rousey will embark on a new journey: motherhood.

‘Rowdy’ took to social media to announce the birth of her first child with fellow MMA star Travis Browne. She welcomed her daughter La’akea MakalapuaokalanipÅ Browne into the world.

Rousey announced in April 2019 that she was retiring from her WWE career to start a family with her husband. Two years later, Rousey broke the good news that she was four months pregnant on her YouTube channel.

It’s still unclear if the combat sports megastar is interested in returning to the square circle.

Mark Hunt’s lawsuit against the UFC could be a big win for fighters – find out more here!